The Codford area has had a long history with ANZAC soldiers and during World War I large training and transfer camps were established for the tens of thousands of troops waiting to move to France. Codford also became a depot in 1916 for the men who had been evacuated from the front line and were not fit to return to the front.

The Codford Badge hill figure also known as The Australian Badge or The Rising Sun is situated on Lamb Down, a steep hillside facing south towards the Wylye Valley at the eastern end of the village.  In its original form it depicted a Trophy of Arms- the Badge of the Australian Imperial Force.  The 175 by 150 foot Badge was cut into the chalk in 1916 after the Australian Brigade Commander, looking at the hill from his HQ at Stockton House in Stockton decided that defaulters should be made as part of their punishment to carve the Badge in this prominent position. The soldiers having to march up and down the hill in full kit and climb up for physical training often in bitter conditions nicknamed the site ‘Misery Hill.’ Another name commonly used locally was ‘The Pimple.’

The initial work was begun by the 13th training Battalion AIF and it was embedded with green, brown and clear beer bottles  that would give the appearance of the bronze badge worn by the AIF on their uniforms. During WWII it was covered over to prevent the Luftwaffe using it as a navigational aid.

The present outline recut is less intricate than the original. 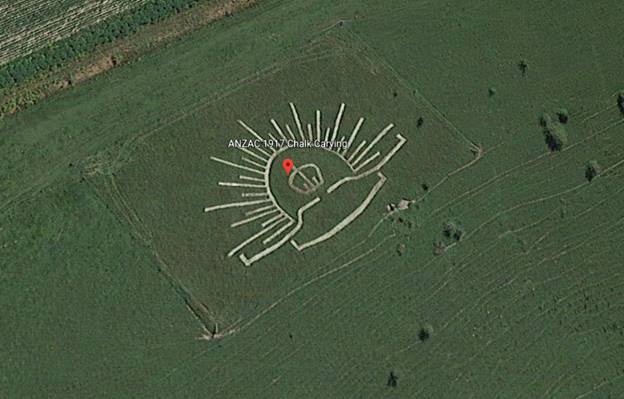 A small plot of land in a tranquil corner of the village close to St Mary’s Church was established as a Military Burial Ground by deed of gift after the Great War. Planted with Irish Yews and Beech trees the ANZAC Cemetery is under the auspices of the Commonwealth War Grave Commission. It is the largest New Zealand War Grave Cemetery and the second largest ANZAC War Grave Cemetery in the United Kingdom. The plot contains 66 New Zealanders, 31 Australians and a soldier from the Royal Army Medical Corps from WWI and along with a lone Welsh Guardsman from WWII.

Inside the hedge from Beanis Path is a single grave, directly behind it two more; there are three rows of graves with an aisle in the centre; four individual graves and finally a long row along the western boundary. These are the ANZAC graves; the WWII headstone is beneath a tree to the east of the Cross of Sacrifice.

This peaceful cemetery is today a place of pilgrimage, it also a place to reflect on the tragedy of so many young men who arrived in the vigour of youth and never returned to their loved ones.  Pneumonia and sickness accounted for the majority of the deaths, 56 that we know of. Very few of the men seem to have been married.

The cemetery is kept beautifully by the Commonwealth War Graves Commission and local volunteers, and the 97 Australian and NZ graves are a central element of the church and village. A dawn commemoration service is held each year on ANZAC Day, 25th April, and the local school also has a service there later in the day. 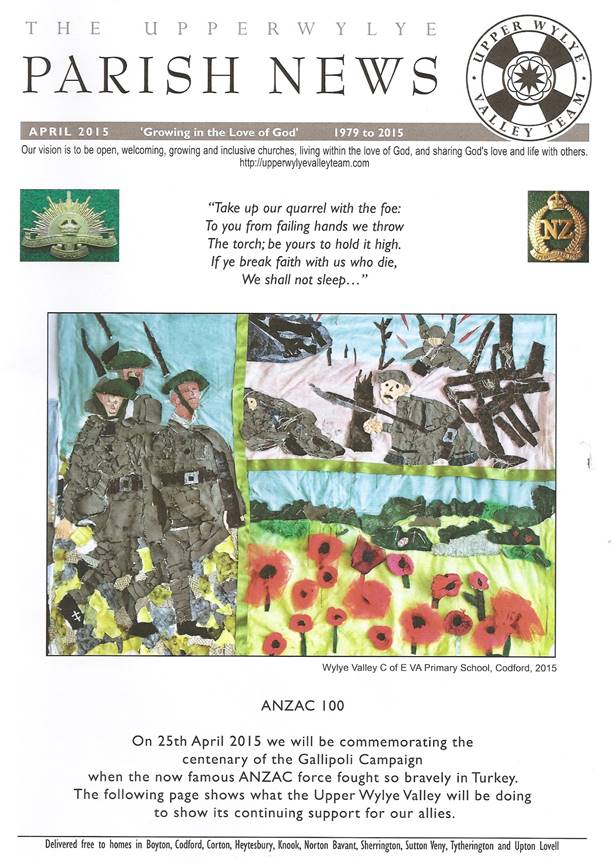 Roll of Honour and cause of death

Private Albert Arthur Harris known to his parents as ‘Sonnie’ was the eldest son of Arthur and Eliza Harris; he came from Ranelagh in the Huon Valley and was an orchardist with a passion for horses. His sweetheart Amy became pregnant with their son Reginald before he left to fight; Sonnie was never to see his child, he died of peritonitis as a result of bullet wounds received in Malta in 1917. Machine gun crews were the target of every enemy weapon on the battlefield; the officers and men of the British Machine Gun Corps were nicknamed ‘The Suicide Club’ with a casualty rate in excess of 33%. Reg knew very little about his father, he was orphaned at 16 when his mother died; Amy had never married.

13] Holder, Pte Harry, 7251. 16th Bn. Australian Infantry. Died of cerebro spinal meningitis 28th April 1917 aged 32. Son of Harry & Grace Leggo Holder of 109 St Leonard’s Avenue, West Leederville , Western Australian; born in Cornwall, England, emigrated to Australia apparently with his family when he was 27; worked as a farmer. Six brothers enlisted, Harry’s younger brother John Leggo Holder was 14 when the family arrived in Australia. John was a clerk when he enlisted in Subiaco, WA as Pte 2431a in 51st Bn. Australian Infantry. He was killed in action in France when he was nineteen and a half and is remembered on memorial panel 568 HAC Cemetery Ecoust-St Mein. The records show that Harry Holder Snr. States a third son was totally incapacitated in the conflict. A search of the Australian Roll of Honour does not indicate any details that indicate any of the other brothers were killed.

Corporal Button was killed in a training accident at No. 2 Camp Codford, when a live grenade thrown by Private Taylor of 51st Bn. landed in a bay full of men waiting their turn to practice. The other men escaped almost unscathed; Corporal Button froze, he was seriously injured and died before reaching hospital. At the Inquest it was recorded that “A bullet had passed completely through his brain, death being due to a fracture of the skull. Deceased had a few wounds on his legs but they were quite slight.”

Both private’s Smith and Osborne have crosses as headstones and an inscription: Erected by his comrades A Company 12th Training.

32] McGregor, Pte. David Edward, 6621. 15th Bn. Australian Infantry. Died of  broncho-pneumonia 23rd January 1917 aged 36. Son of Mrs Isabella McGregor; born at Bega, New South Wales; worked as manager of a cheese factory. He had two brothers in the AIF Lieut. McGregor of 121 Light Horse ‘ Mentioned in Despatches’ & Sgt. Major Wallace McGregor of 25th Battalion ‘Military Medal.’ Neither man appears on the Australian Roll of Honour so it would appear they survived the war.

34] Parkinson, Pte. Alfred Henry, 7109. 16th Bn. Australian Infantry.  Died in Sutton Veny Hospital of broncho-pneumonia 26th March 1917 aged 37. Son of William Jones & Isabella Louisa Parkinson; born in South Australia; worked as a miner as did his brother Pte Charles Frederick Parkinson, 3914, of 11th Battalion. He was killed in action somewhere  in France between 22-25th July 1916 aged 30. He is remembered on panel 63 at Villers–Bretonneaux. Inscription reads: In the path of duty was the way to glory.

52] Chilton, Pte. Thomas William, 1588, [ also listed as John William Auton]. 53rd Bn. Australian Infantry. Died of sickness 30th March 1918 aged 29. Son of Mrs Sarah Ellen Chilton; born at Ripon, Yorkshire, England. He seems to have  been a farmer who arrived in Australia when he was 22 and enlisted in Coolamon NSW. He had been wounded at Suvla Bay in 1914 and in France in 1917.

At the time of his death on Friday 24th May 1918, Major Jordan was second in command of the New Zealand Command Depot at Codford.  He was a passenger on an Airco DH6C6518 piloted by 2nd Lieutenant Joseph J. Daley from New York based at No 8 Training Depot Station at Netheravon.  The crash occurred when the outer port wings collapsed as the aircraft began to pull out of a loop and dive manoeuvre to 1000 feet. The Training Depot had been formed 1st April that year and was responsible for basic and advanced training; the crash was its first fatality.

The single grave from WWII is sited near the Cross of Sacrifice, close to the hedge bordering Church Lane beneath a large Beech tree.  Thirty-three year old Lance Serjeant Christopher Thomas Brown was in the 2nd Battalion Welsh Guards stationed at Codford with 6th Guards Armoured Tank Brigade. Born on 29th August 1909, the son of William Telford and Elizabeth Brown; Christopher Brown enlisted in Middlesborough eight days before his eighteenth birthday on 21st August 1928. From 1929-1930 he served in Egypt, transferring to the reserves two years later.  He was recalled to regular service in 1939, promoted to Lance Corporal on 17th June 1940 and to Lance Serjeant three months later.

Christopher Brown was found dead of gunshot wounds to the head in the room adjoining the Sergeants Mess on 8th April 1942. His head was laid on a kit bag and there was a rifle on the floor by his side, medical evidence at the inquest stated that the skin around the wound was discoloured by explosive and the shot had penetrated the brain.  He left a widow, Elizabeth Doris, and two sons who were living at this time in Penberth, Cornwall.

'The Men of St Mary's and the ANZAC War Graves'

Steve Fuller – ‘The Bedford Regiments in the Great War’