Boscombe Down and Old Sarum

Wiltshire is best known for its iconic prehistoric monuments, the beautiful Salisbury Cathedral and picture-perfect villages. The standing stones of Stonehenge are probably the most notable but in the aviation world, Boscombe Down is right up there as the home of aircraft research & testing. The airfield began life with the Royal Flying Corps in 1917 and after closing for a time inter-war, it reopened as RAF Boscombe Down in 1930. The Aeroplane and Armament Experimental Establishment (A&AEE) arrived from RAF Martlesham Heath, Suffolk, on 9 September 1939, shortly after the outbreak of the Second World War.  More about the history of Boscombe Down later………………

Some 60 years on in 1999, the aviation collection began at Boscombe Down Airfield with the aim of preserving the history of flight and flight testing at the airfield. In 2012 it was decided to move the airframes to the civilian airfield at Old Sarum, just 6 miles away, so it could open to the public. Since then, the collection has doubled in size, now occupying two of the impressive hangars.

Old Sarum Airfield dates back to 1917 and retains many Grade 2 Listed buildings from the era. Three pairs of large aircraft hangars and one large aircraft repair hangar were reputedly built by German prisoners of war and the Chinese Labour Corps. 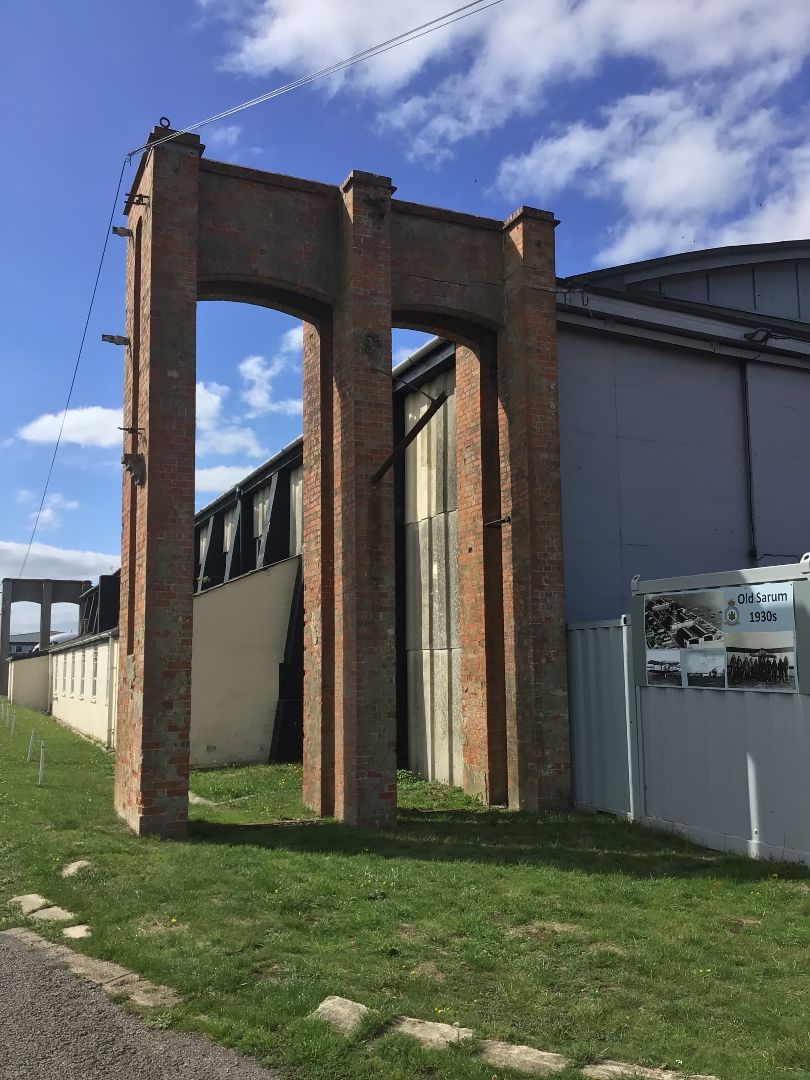 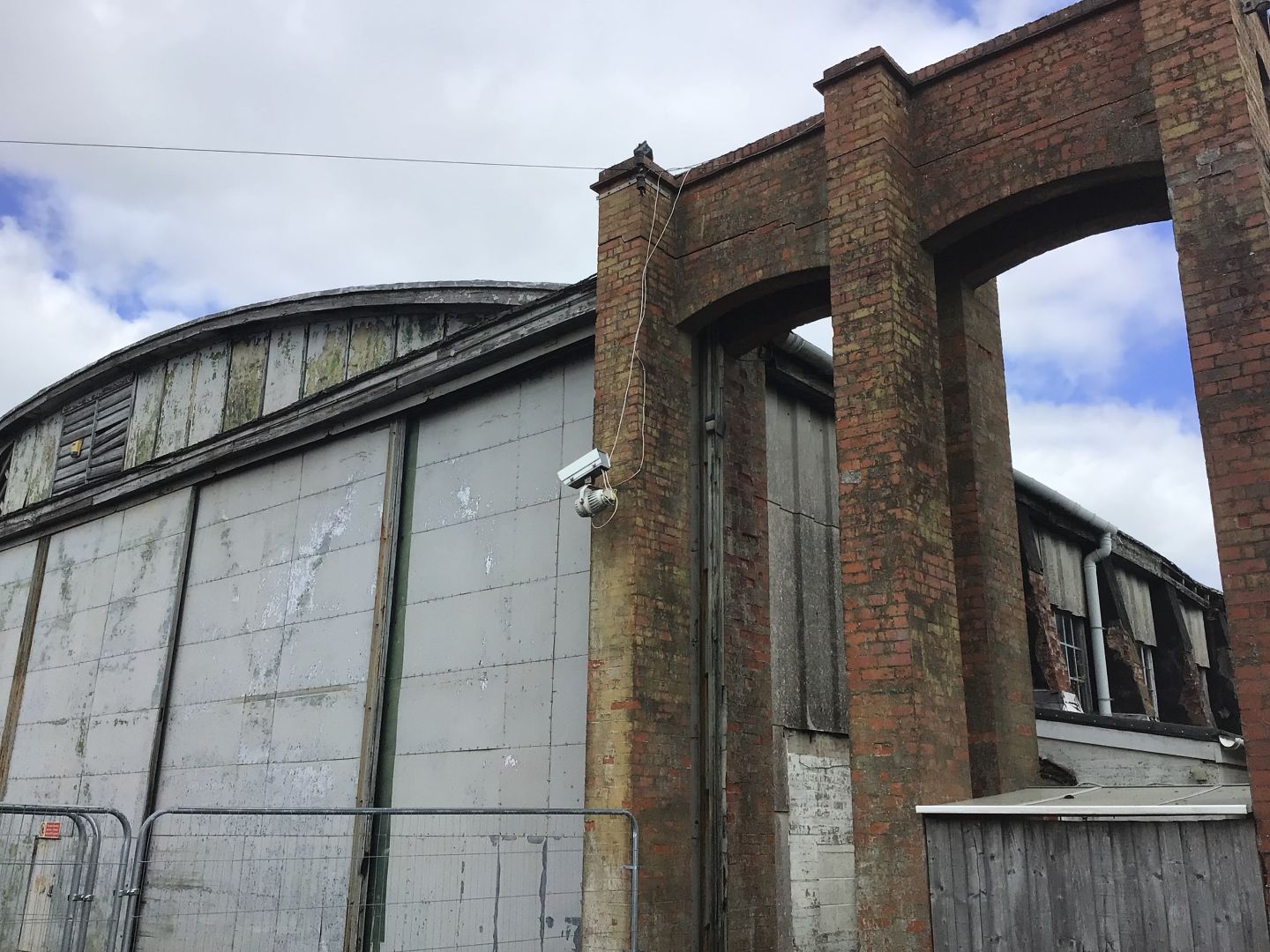 Exhibits of national importance include the unique Sea Harrier XZ 457 and the rare Comit C Mk 2 Sagittarius nose section which sits outside as a welcome along with the Provost and Hunter.

The hangars have a geodetic pattern of roof trusses. The ‘ Belfast’  truss was introduced around 1860 to meet the demand for efficient wide span industrial buildings. It’s quite incredible to look up and see these 100 year old beams. 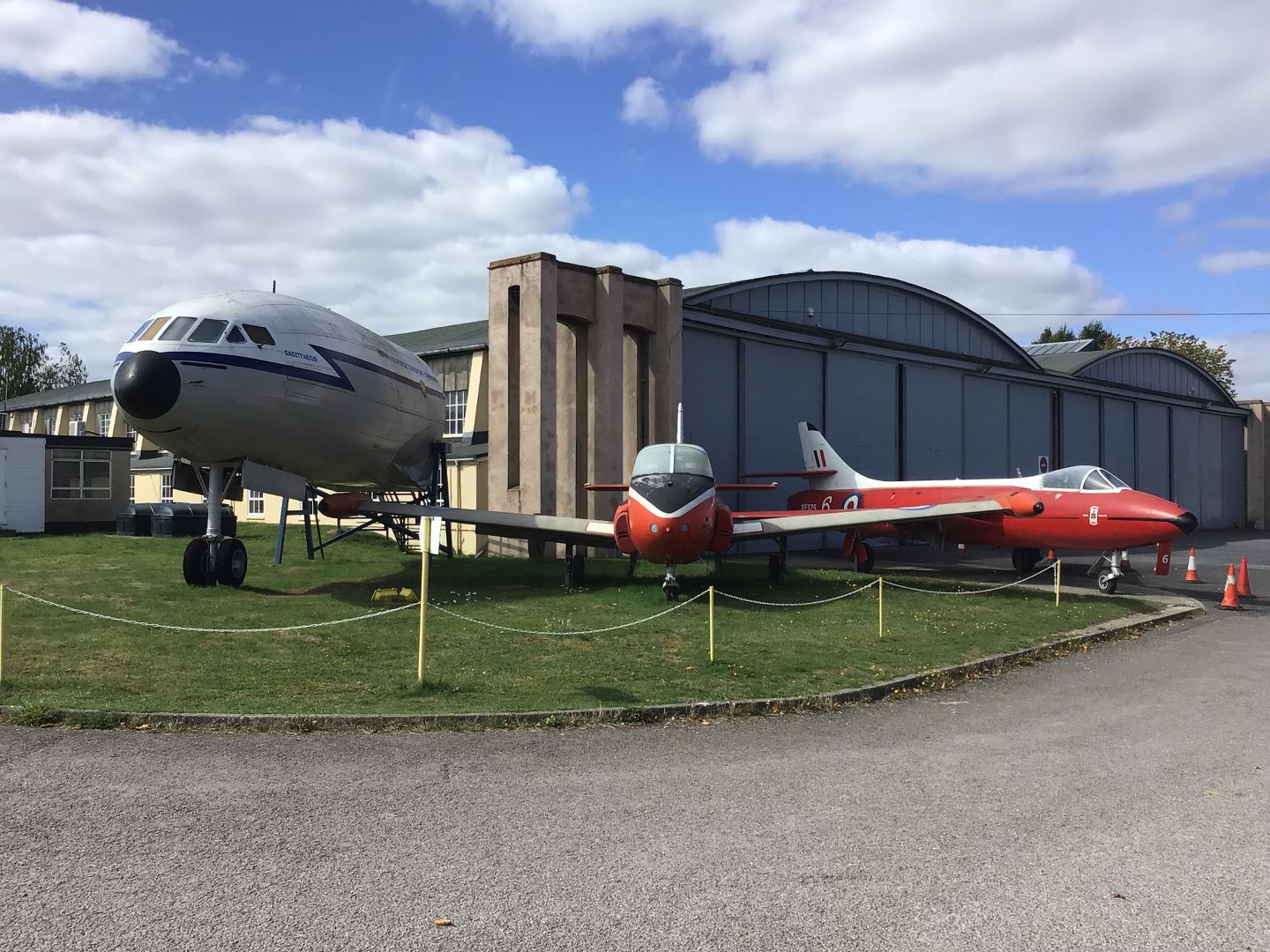 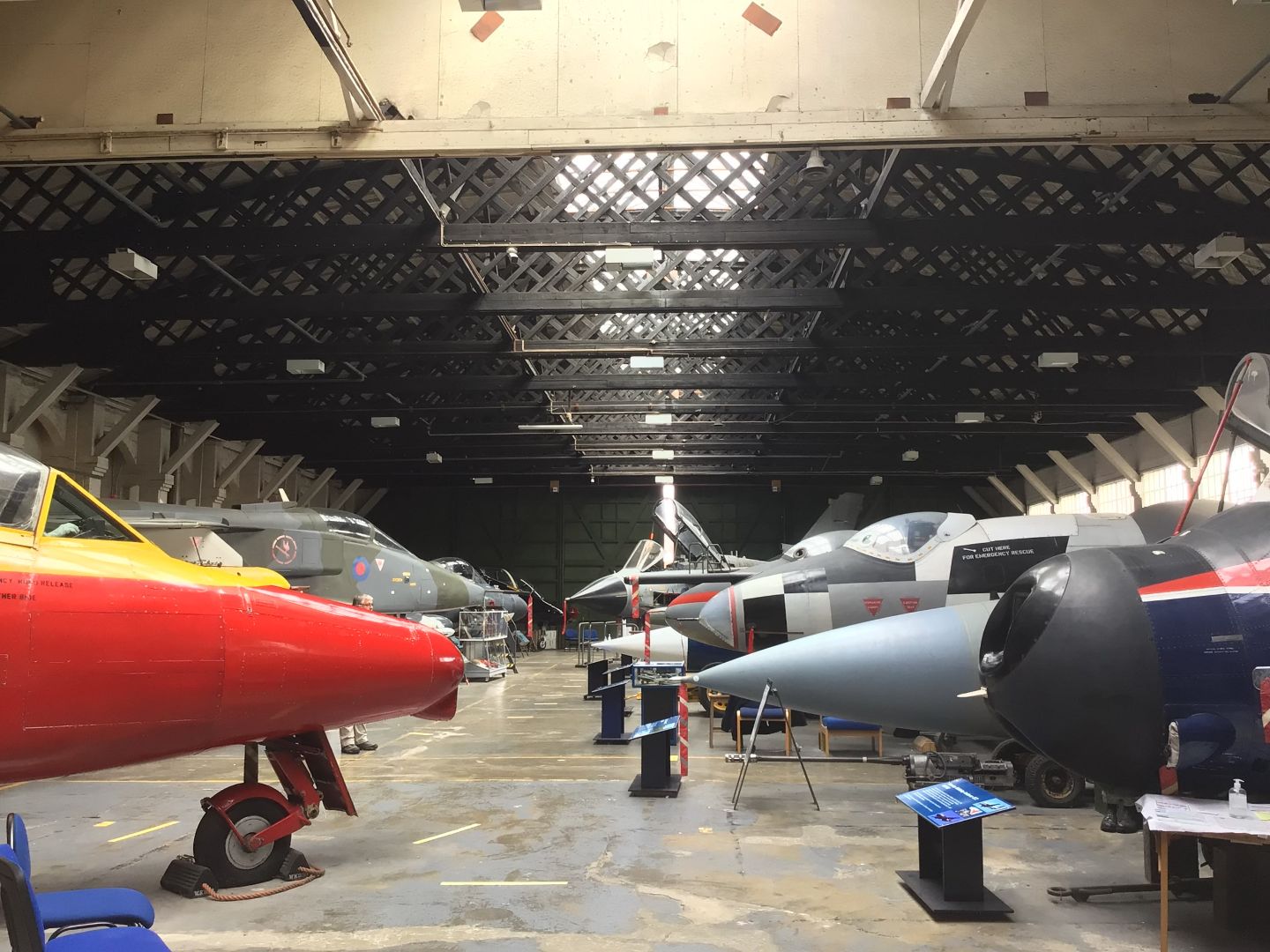 Other exhibits include Sycamore Mk3 WA577 which was used at Boscombe Down to provide the certificate of airworthiness for the civil version. Unique to this muesum is the ablility to get inside almost all of the aircraft. 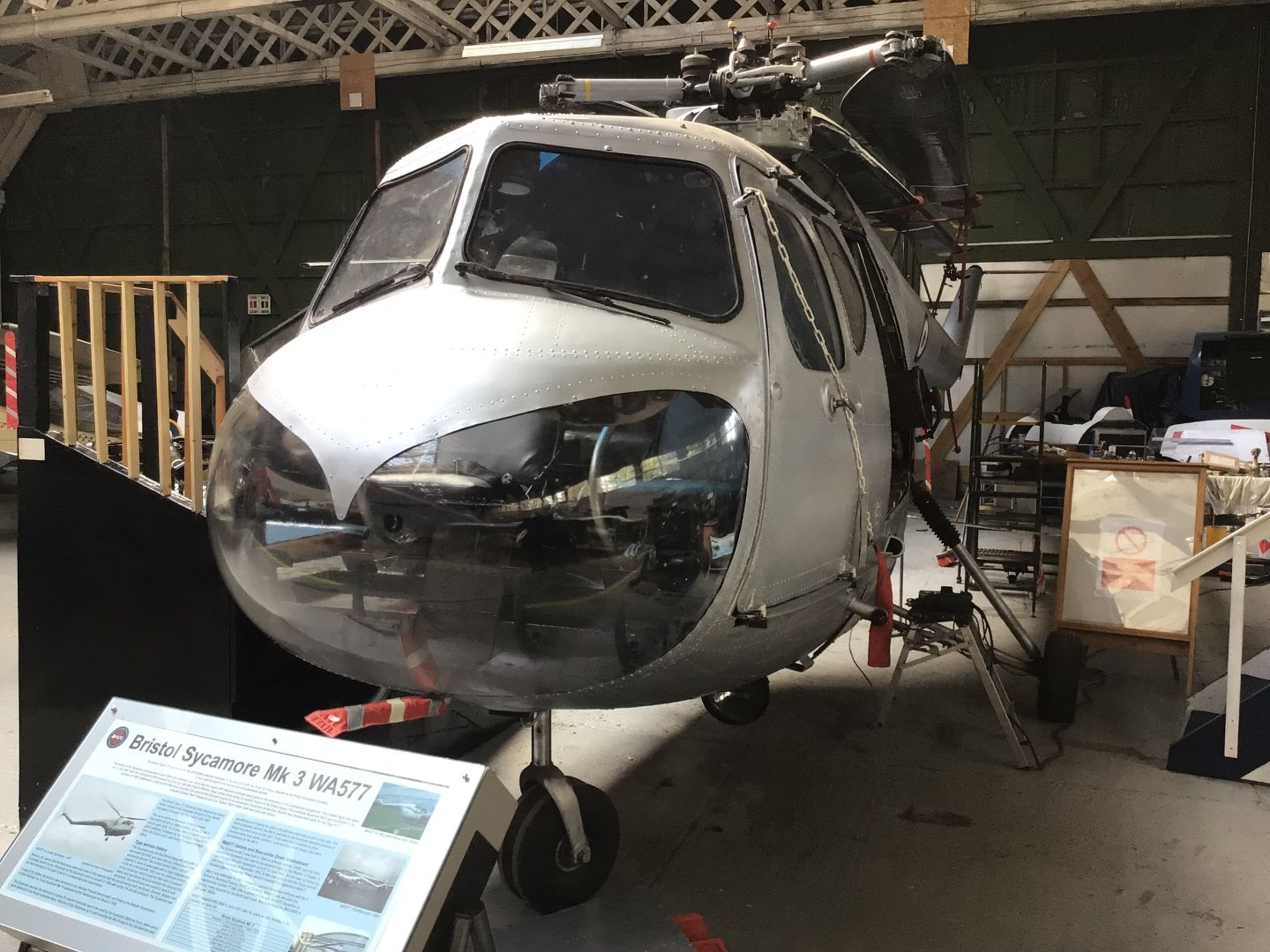 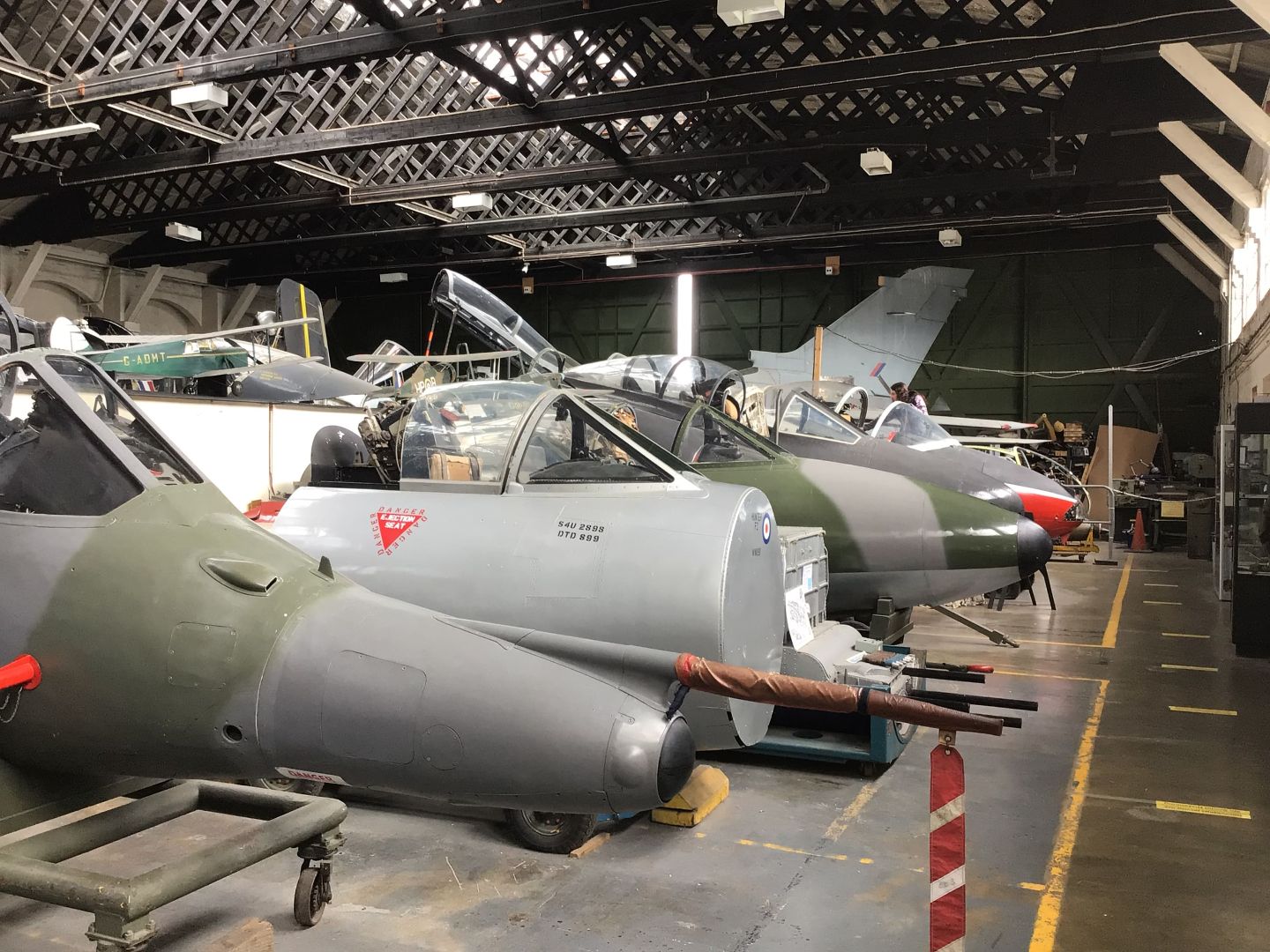 The Hawk XX154 is on loan from a private owner due to its connection with Boscombe Down and was delivered to the museum by Chinook to mark the 45th anniversary of it's first flight. It was the first time a Chinook had lifted a Hawk.

The BE2 full scale replica was built to celebrate the 90th Anniversary of Boscombe Down in 2007. An amazing achievement, built from non aviation specified material by just 5 volunteers with a little outside help. 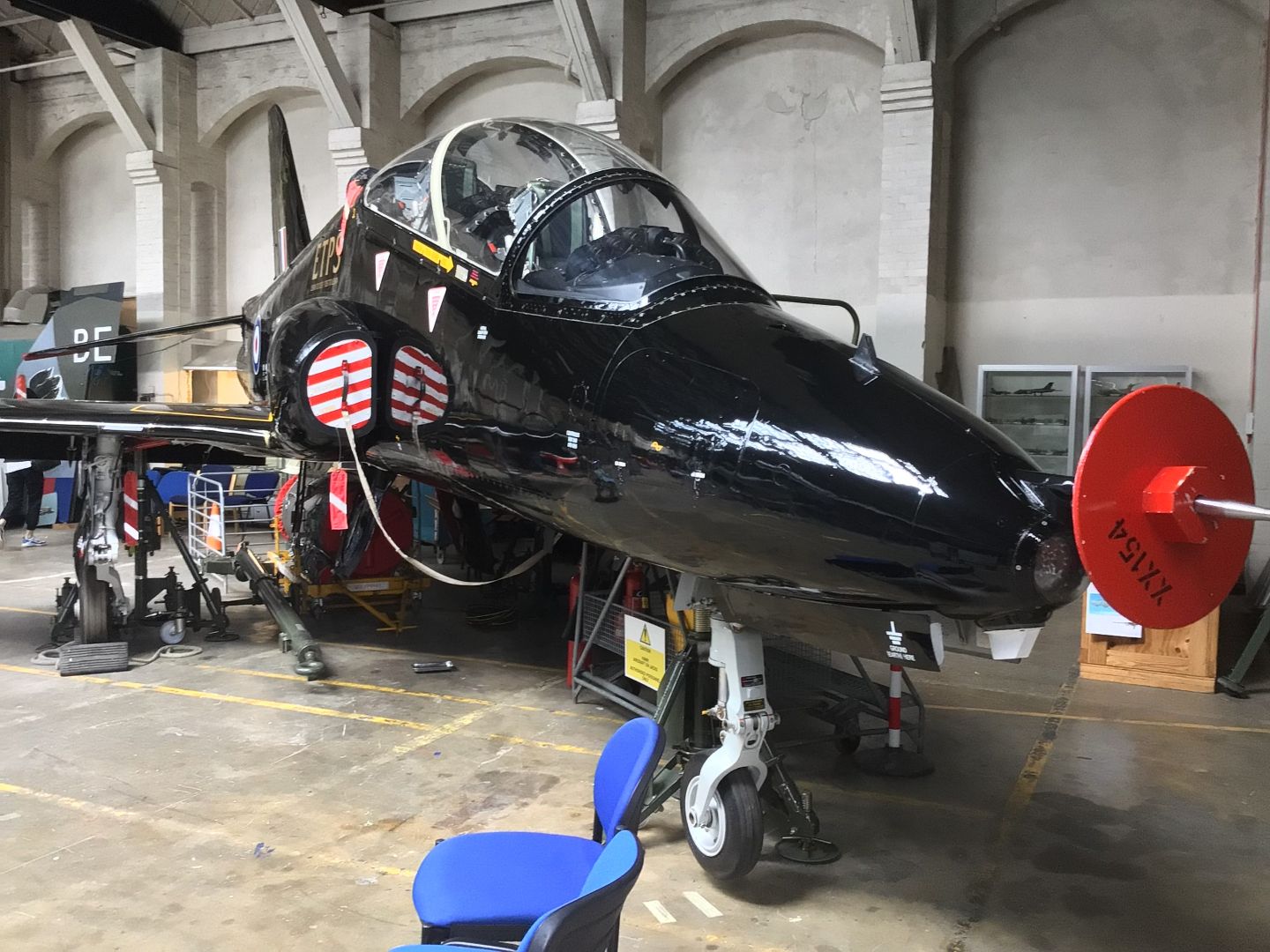 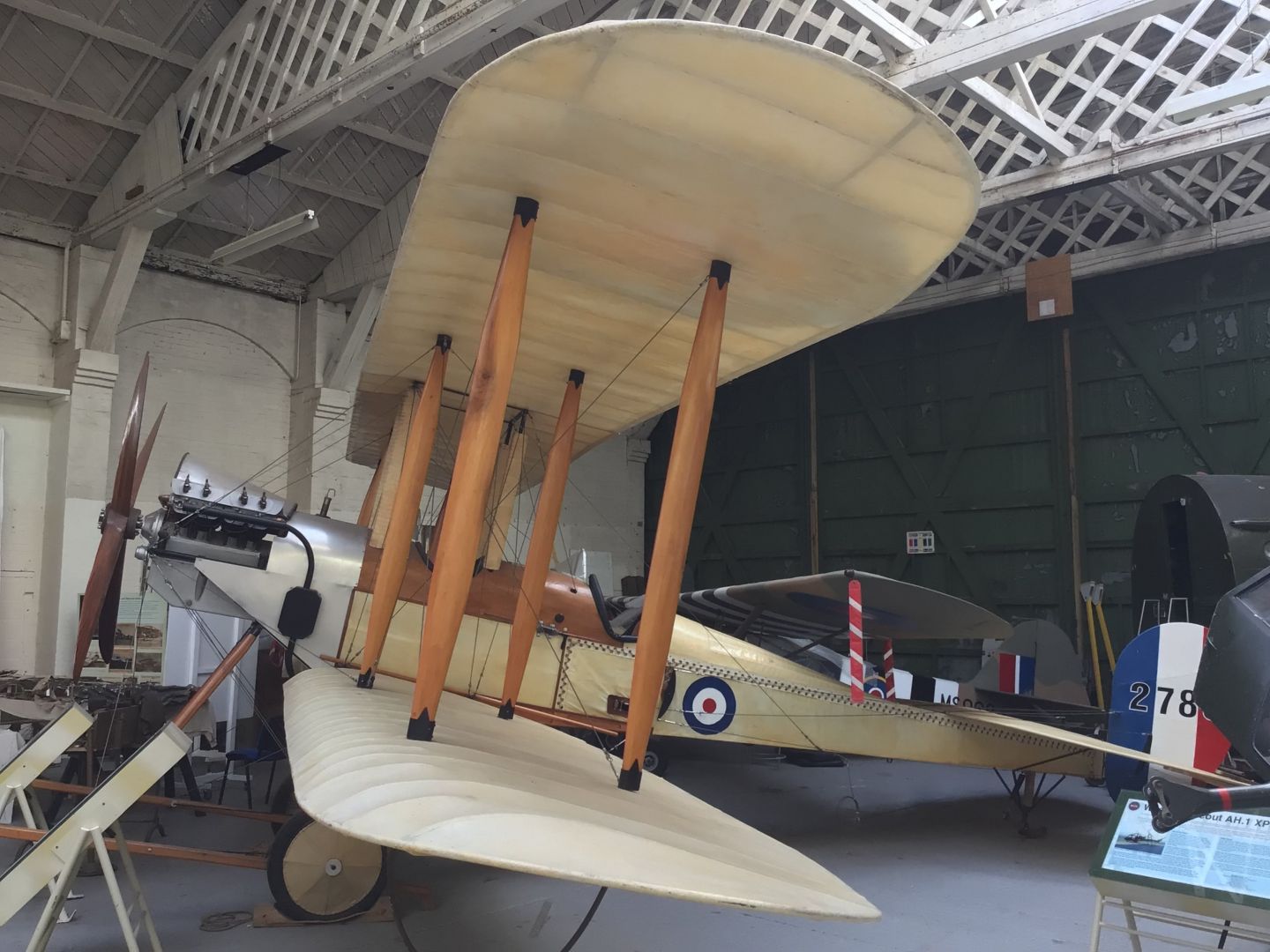 One of the latest projects is the forward section of Lancaster PD130 using as many of the original fuselage frames as possible. This particular aircraft was a much modified B1 Special designed to carry the Barnes Wallis 22000lb Grand Slam Bomb. 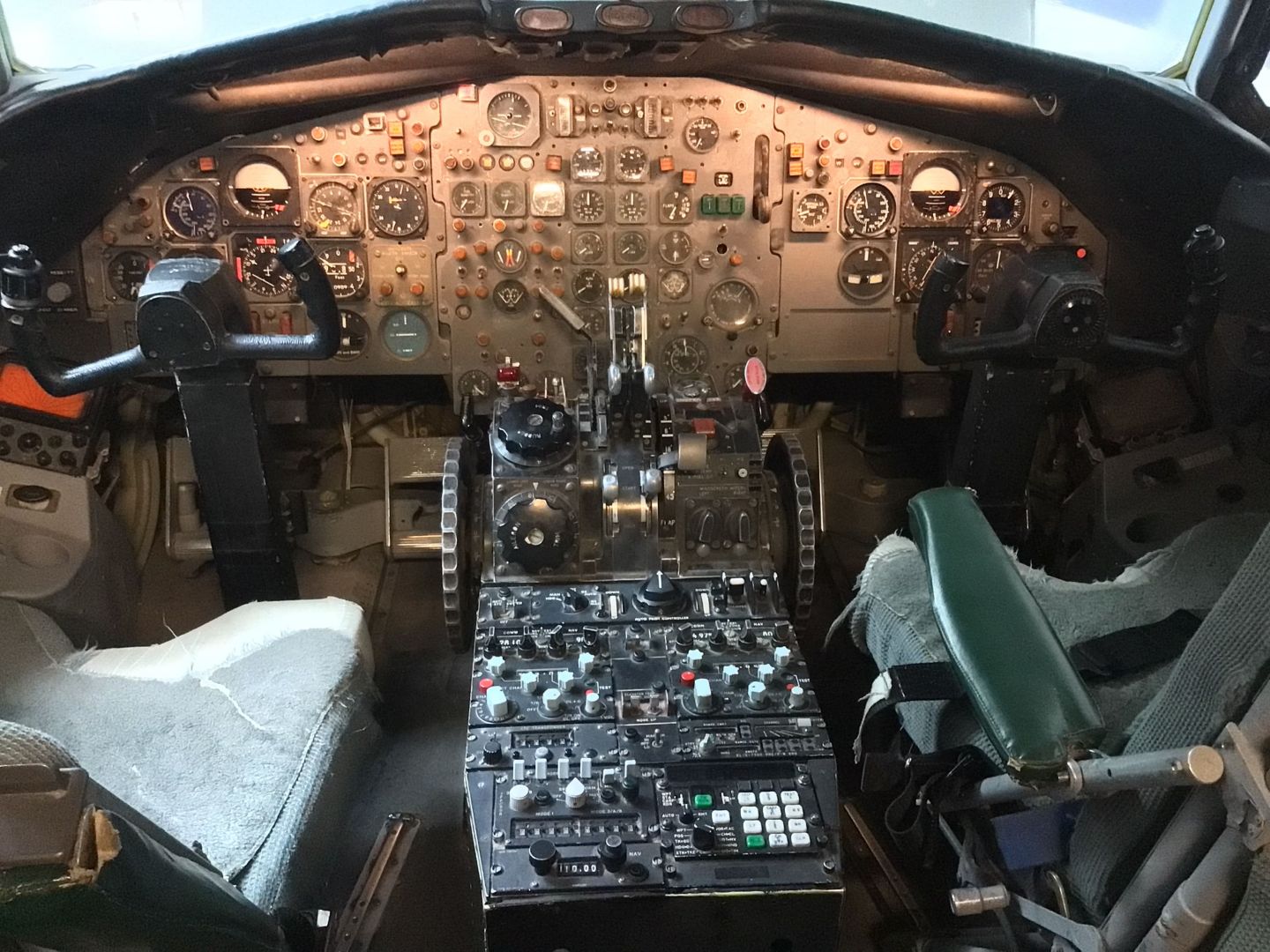 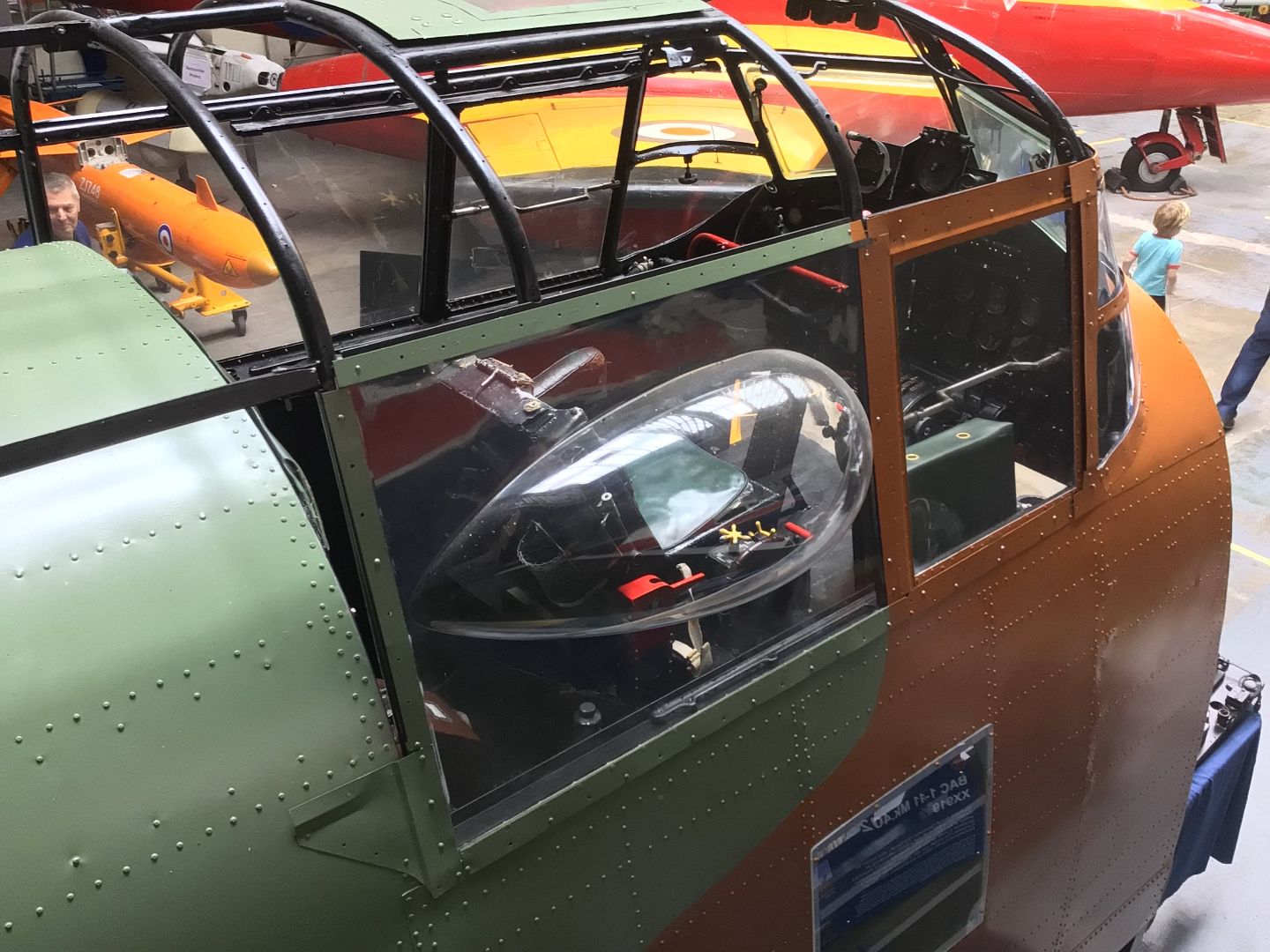 On loan from Cosford are the Electric P1 and the Avro 707 and on loan from a private owner is the Northrop MQM-57A/SD-1 Shelduck drone. 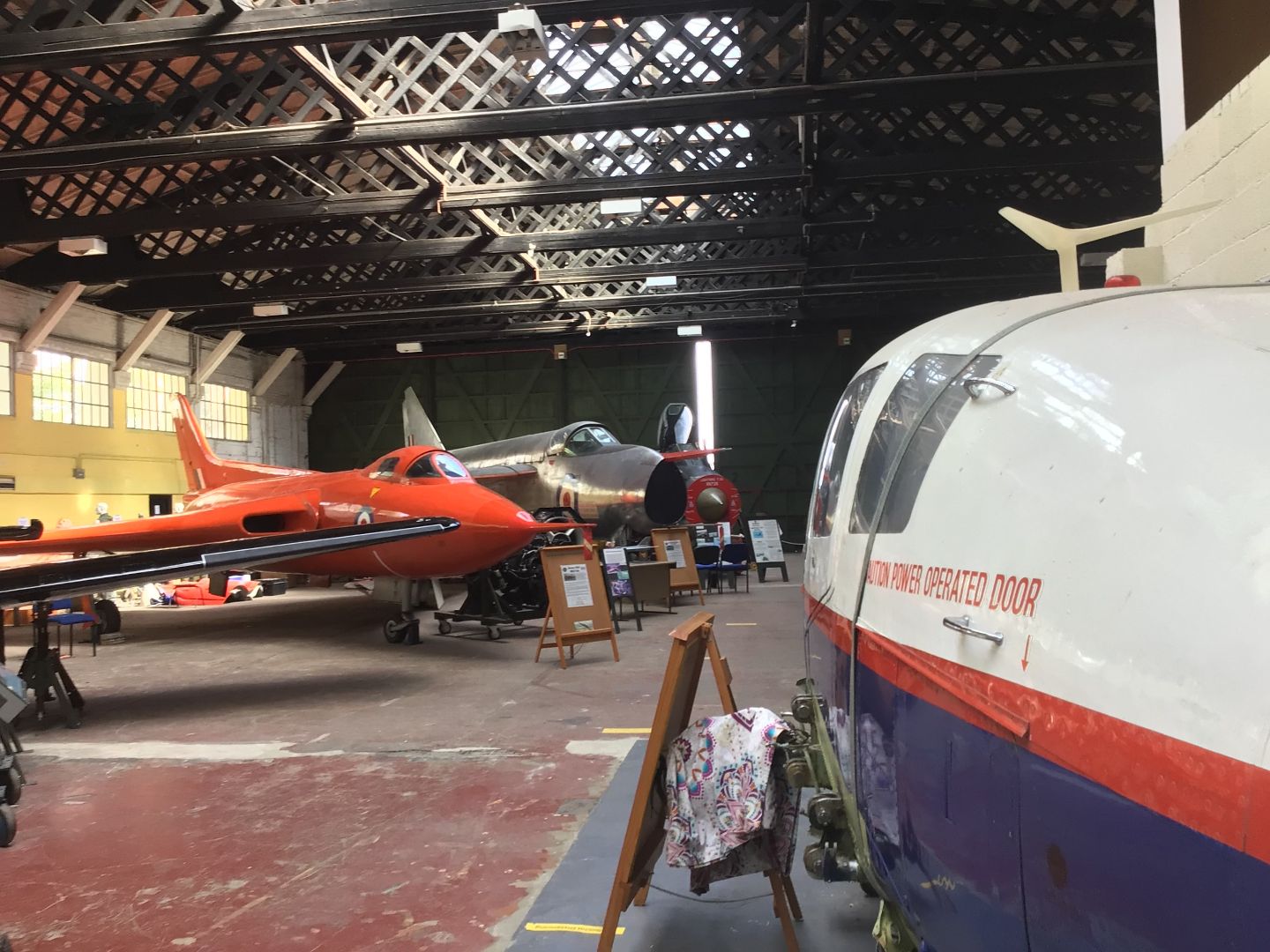 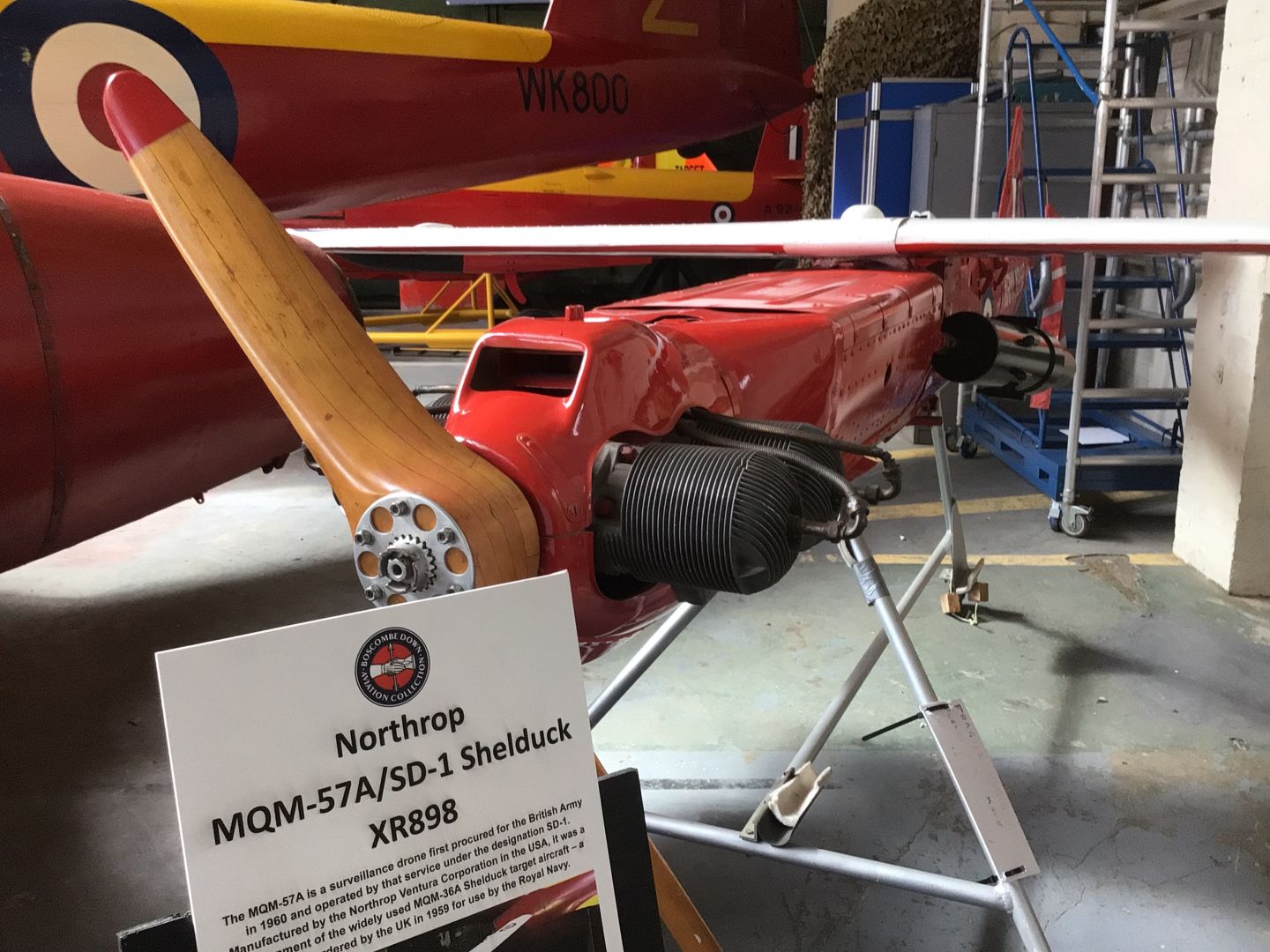 There is a separate controlled environment room dedicated to the Royal Flying Corps which is a fascinating insight into the early pioneer aviatiors.

Outside stands a memorial to the Air Observation Post units. 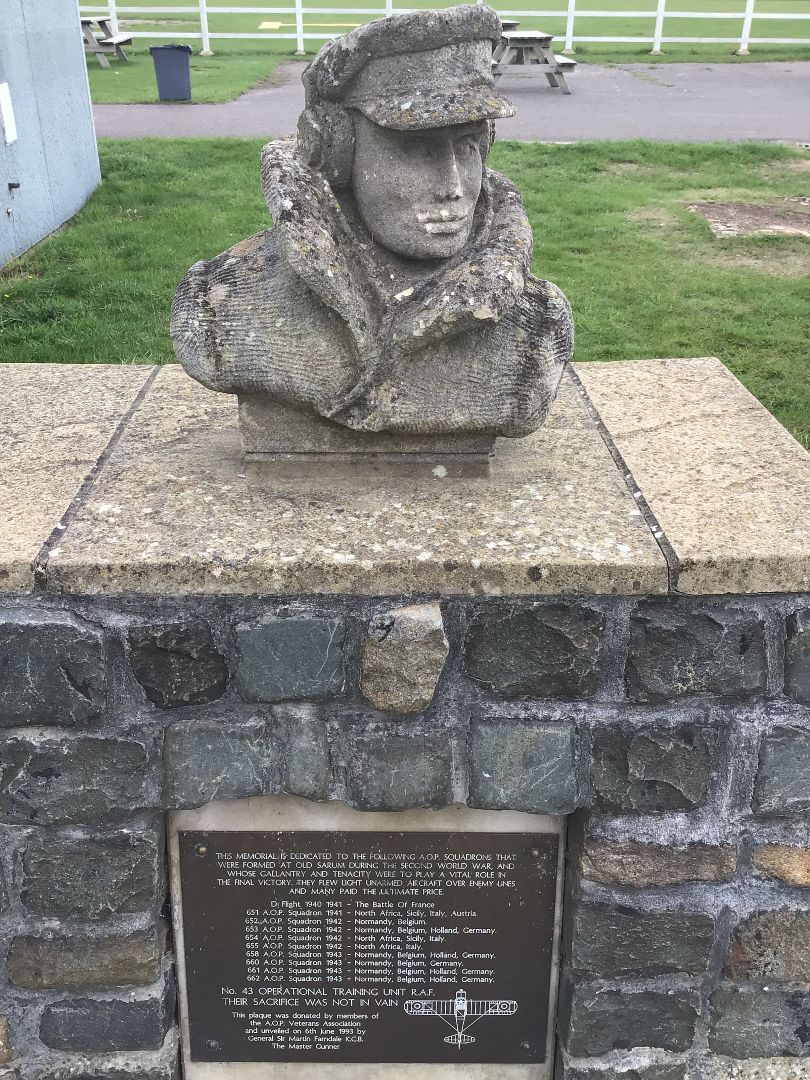 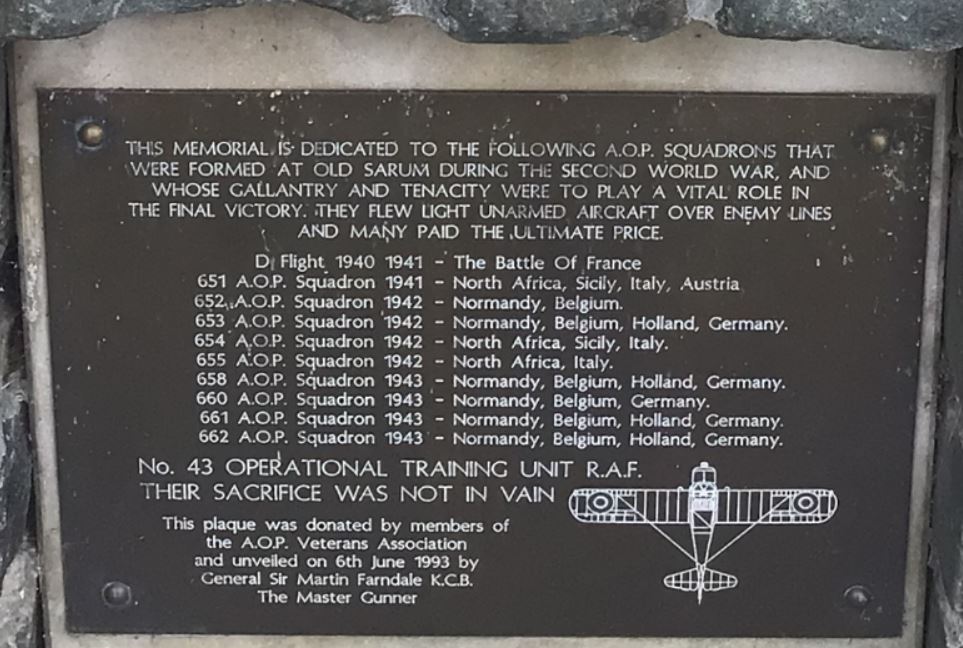 Old Sarum Airfield is a lovely place to enjoy the aviation collection, have lunch at the café overlooking the airfield and then indulge in a brew at Dark Revolution Brewery & Tap Room whilst watching the skydiving.

In the final years of the first World War the airfield was known as Ford Farm and was used by RFC bomber and training aircraft. When the RAF was formed in 1918 the airfield was renamed RAF Old Sarum and was used for pilot training until in 1921 when it became the home of the School of Army Cooperation which had relocated from nearby Stonehenge, and for the inter-war years ran mixed courses for Army and Air Force personnel, developing airbourne artillery spotting and tactical reconnaissance.

During the Second World War the Royal Canadian Airforce flew Lysanders along the coast and the airfield was home to Tomakawks, Harvards, Magisters for target towing and nine squadrons equipped with Austers.

One new aspect of post war aviation, which was of interest to all three services, was the widespread use of helicopters. Accordingly, on 1 June 1961, the RAF element of the Helicopter Development Unit (HDU) was formed at Old Sarum, with a handful of early helicopter prototypes, Sycamores and Whirlwinds, to explore their military potential. The Bristol Sycamore was the first British Helicopter to receive a certificate of airworthiness, as well as being the first British-designed helicopter to be introduced by and to serve with the Royal Air Force.

In 1979 the base was demilitarized, during the 80s and 90s was privately owned by Edgley Aircraft who designed and manufactured the Edgley Optical light observation aircraft, and following their insolvency, new owners changed the name to Brooklands Aerospace Group and continued operations before moving to Bournemouth.

From 1992 Old Sarum Flying Club offered a variety of training until closing in 2008, when the new Old Sarum Flying School was formed, subsequently rebranding to GoFly UK as sister operation to GoSkyDive, currently operating from the airfield, which is now a conservation area.

Old Sarum Airfield closed in October 2019 after 102 years of operation but is open by arrangement.

Boscombe Down – a brief history

When the aerodrome opened in 1917 it was known as Royal Flying Corps Station Red House Farm and used for training aircrew for operational roles in France during the First World War. It then closed down in 1920, returning to agricultural use.

1930 saw it reopened as Royal Air Force Boscombe Down, a bomber station in the Air Defence of Great Britain command, the fore-runner of RAF Fighter Command.

Shortly after the outbreak of World War Two, The Aeroplane and Armament Experimental Establishment (A&AEE) arrived from RAF Martlesham Heath, Suffolk and began the aircraft research and testing for which it is so well known.

This carefully researched list of first flights is shared with kind permission from Boscombe Down Aviation Museum. 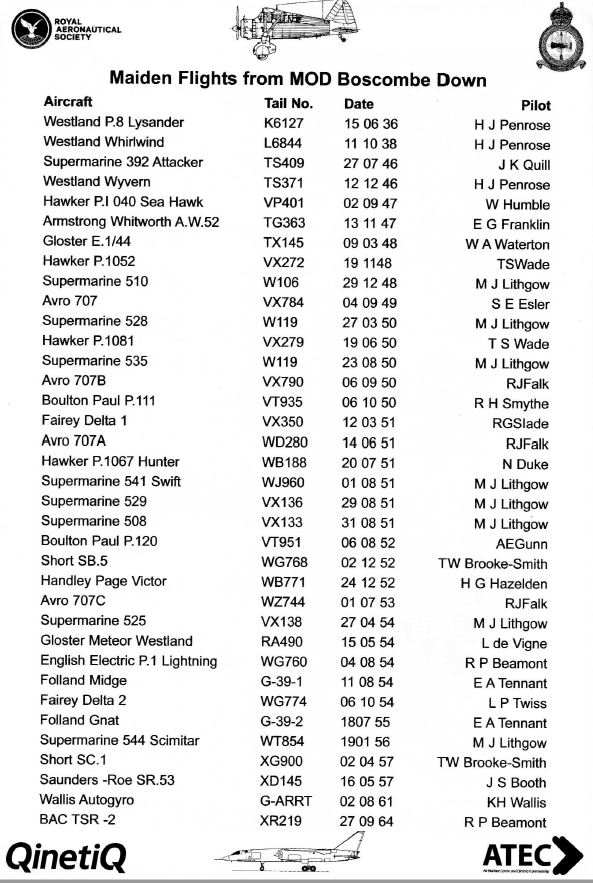 At the end of the Cold War the site was renamed the Aircraft and Armament Evaluation Establishment. During the early 90s it is rumoured that Boscombe Down was assisting the USA with its highly classified black projects. It is speculated that a plane that crashed there in September 1994 was a hypersonic spy plane. Whatever it was, it was disassembled and returned to the US by the C5 Galaxy with both the British and American Governments refusing to comment on the incident.

In 2001, Qinetiq - a multinational defence technology company based in Farnborough, established a long term partnership with the Ministry of Defence covering 16 sites including Boscombe Down which remains a military airfield and home of the Air Test and Evaluation Centre operated by Qinetiq for the MOD.

It is a civilian operated airfield, administered by the RAF Air Warfare Centre at RAF Waddington which supports aircraft development. It provides an operational airfield with the longest military runway in the UK.

By comparison the longest in the world is Shigatse Peace Airport (Shigatse Heping Airport, or Shigatse Air Base)  a dual-use military and civilian airport serving Shigatse, the second largest city in Tibet Autonomous Region, China

To read more about the 1994 "incident" see here