At Omaka airfield you might be surprised to find such a world class array of aircraft, stories and rare memorabilia, beautifully displayed with realistic and dramatic dioramas, and given the theatrical treatment that the museum has become famous for. Omaka Aviation Heritage Centre is home to much of film director Sir Peter Jackson’s personal collection which is presented in the WW1 exhibition Knights of the Sky, and home also to the WW2 exhibition Dangerous Skies. These unique displays are brought to life by the magic of Weta Workshop and WingNut Films.

But let’s go back to the beginning

In the late 1990s a group of enthusiasts formed the Marlborough Warbirds Association and imported two Nanchang trainers to Blenheim. This generated a lot of interest and soon drew other heritage aircraft to the area.

After much knocking on hangar doors by the public, The New Zealand Aviation Museum Trust was created in 1997 to make these aircraft more accessible. Many years of fundraising and planning followed which caught the attention of the very generous Sir Peter Jackson, who’s enthusiasm added to the determination of the Trust to fulfil their dream.

Knights of the Sky

Sir Peter Jackson’s personal Great War Collection was presented in the opening exhibition “Knights of the Sky” in 2006, its historical importance and rarity providing an experience never seen before. It is one of the biggest collections of World War 1 aircraft in the world, made up of more than 20 planes – many of them original, plus rebuilds, reproductions and models. The dramatically lit exhibition includes the Curtiss MF Flying Boat, the Italian time capsule Caproni CA.22 and Fokker Triplanes, along with extensive collections of uniforms, instruments and personal items belonging to famous Allied and Axis pilots.  The museum takes you on a journey with incredible dioramas, some of which recreate actual incidents and give a fascinating insight into the horrific situations these pilots found themselves in.

The museum houses an impressive array of rare memorabilia such as personal items belonging to Germany’s Red Baron, Manfred von Richthofen and the infamous Hermann Goering. The Red Baron’s belongings include letters, trophies and even a tattered piece of his plane's fabric covering showing the Iron Cross. It is one of the few places you’ll be able to see a Blue Max medal too. 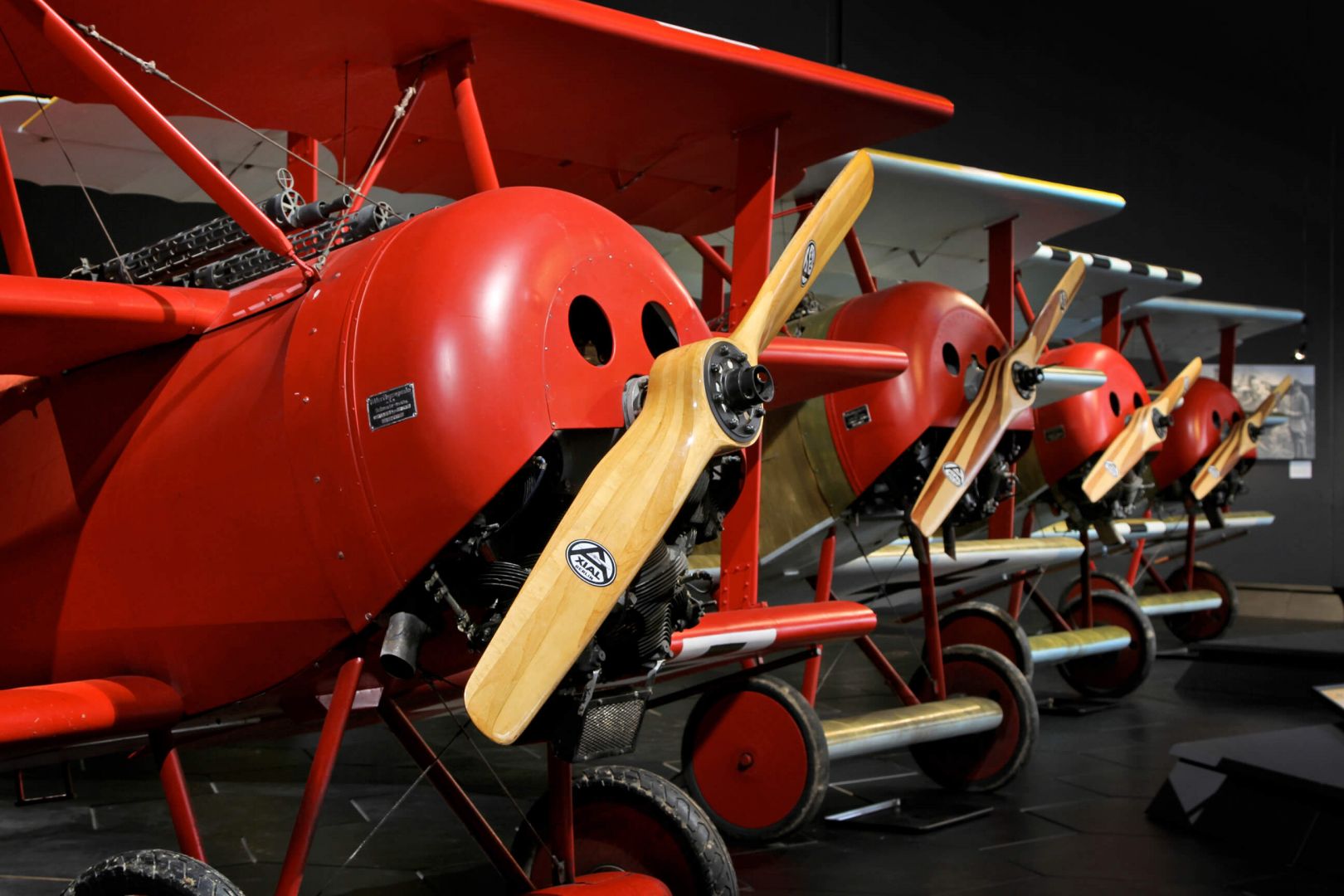 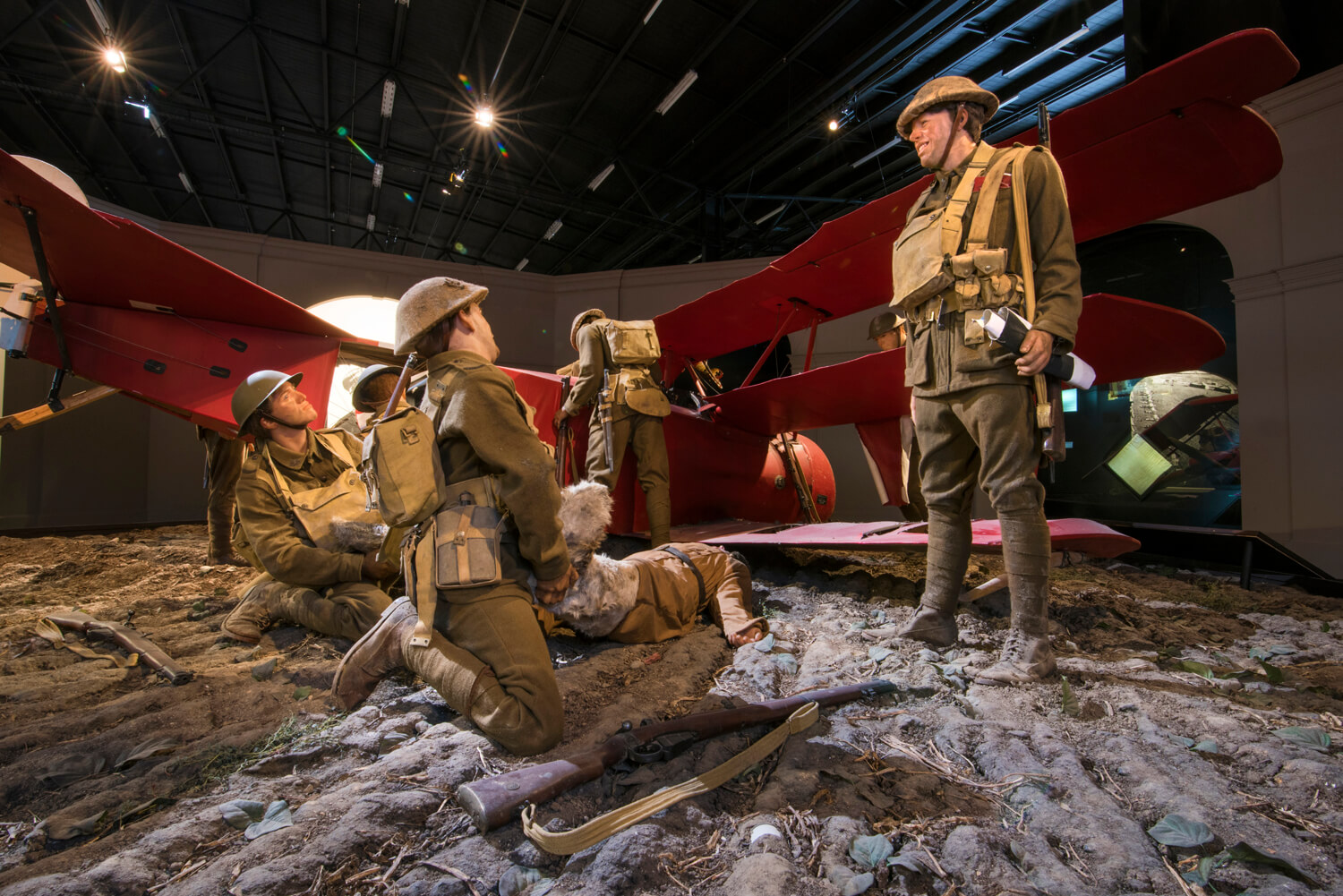 Ten years later, following the huge success of the Knights of the Sky, the story continued with the opening of the WW2 collection “Dangerous Skies” including the world’s only flyable Avro Anson Mk.1 and a Griffon-powered Spitfire. It is another epic journey through a bygone era which will sweep you up with its stories and beautifully created displays. Women pilots feature more prominently in this exhibition and in a world first (outside of Russia) the Battle of Stalingrad leaps off the pages of history in a truly thought-provoking cinematic experience.  This display was further added to in recent years with a Messerschmitt Bf108 once owned and flown by German ace Franz Stigler, and the second a Lockheed Hudson, an American-built light bomber and coastal reconnaissance aircraft which has been suspended in a dramatic crash scene in the depths of a Pacific island jungle. 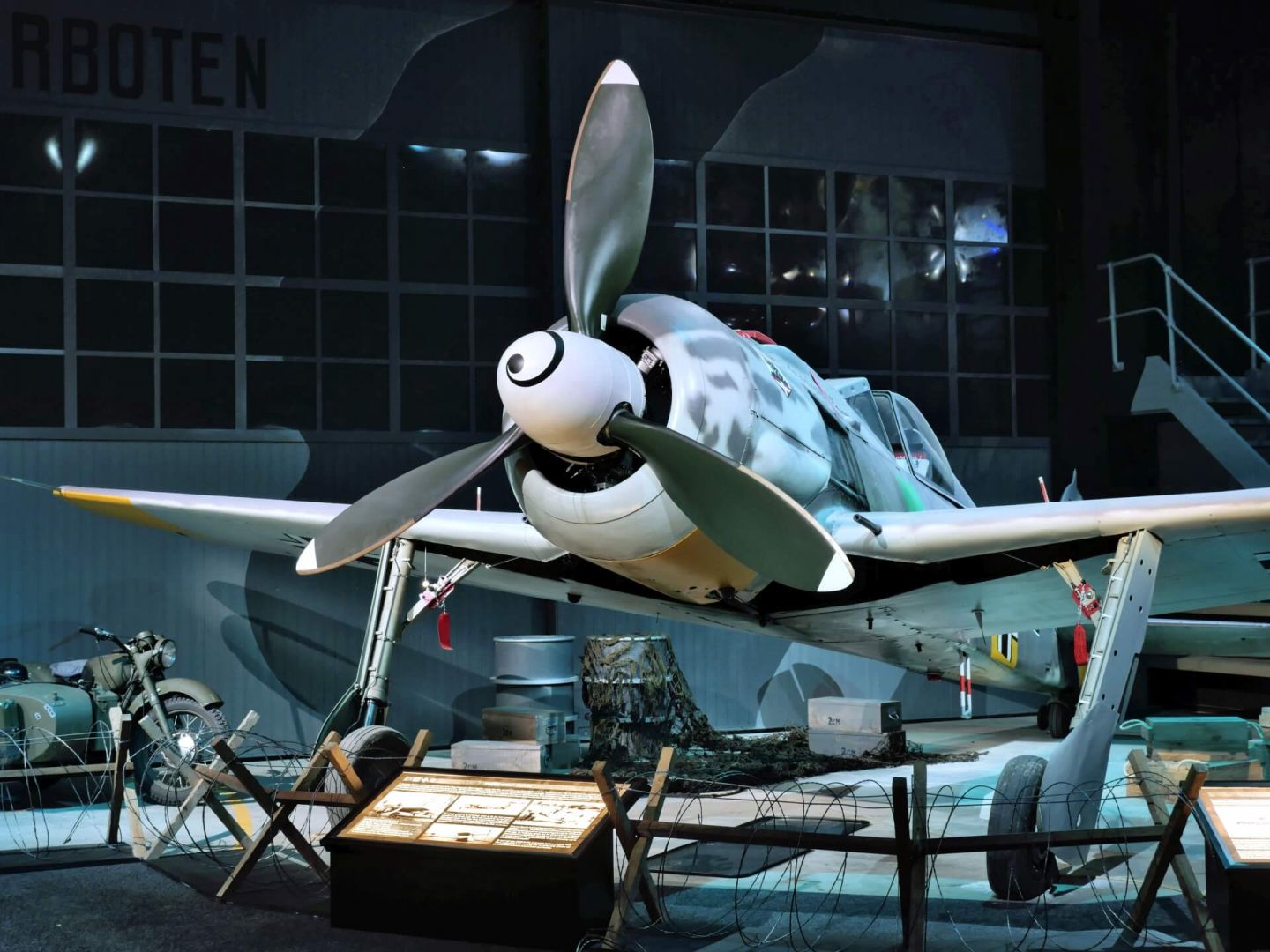 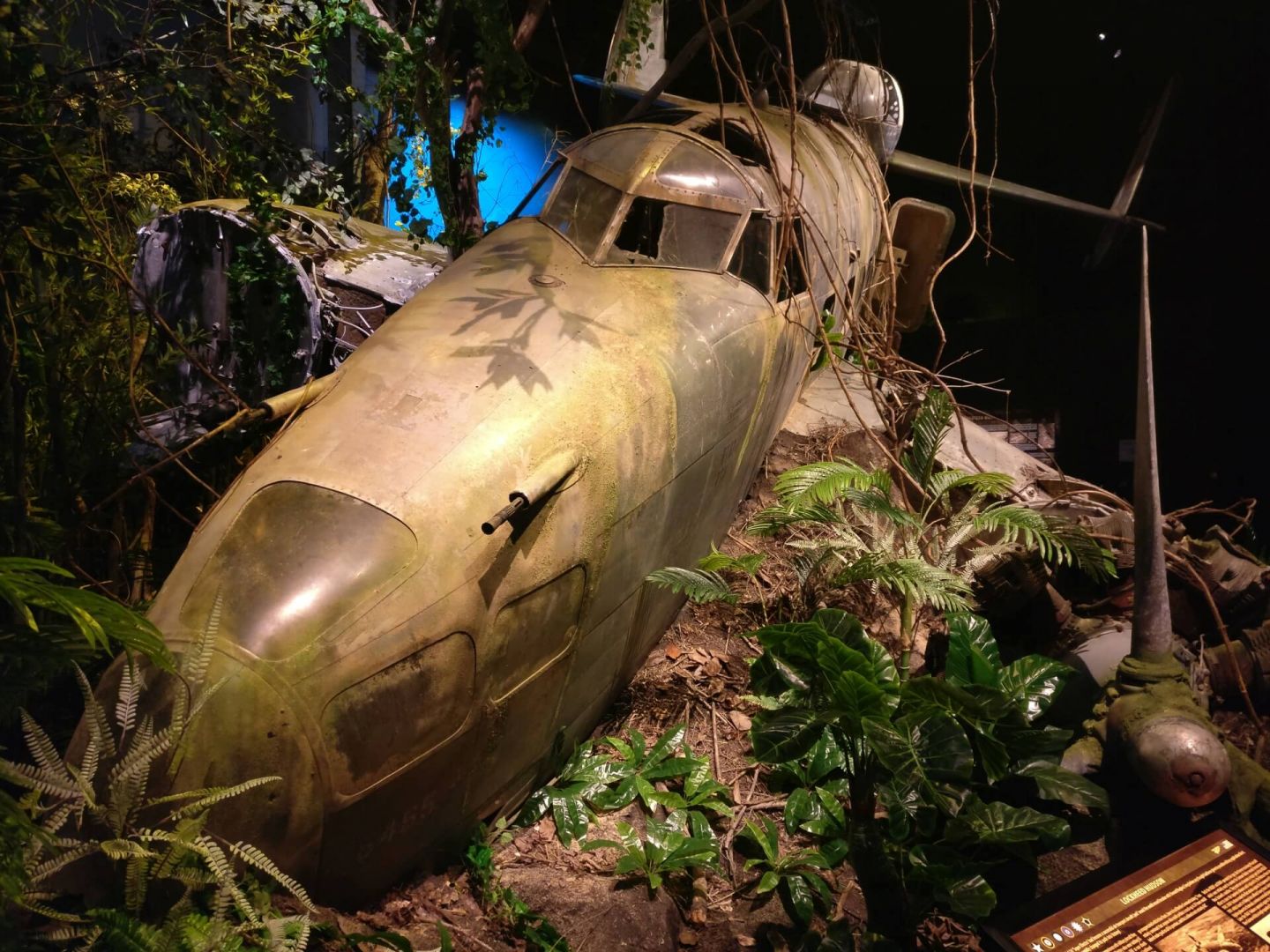 Some of the many airworthy aircraft at Omaka are available for pleasure flights.

The Avro Anson MKI entered service with Britain’s Royal Air Force in the Coastal Reconnaissance Bomber role. Of the 11000 built, this is the last one flying and, no longer part of the display, still resides at the airfield offering joy rides. . All crew positions including Co-Pilot, Navigator/Bomb Aimer, Radio Operator, and air Gunner are as they were when the aircraft was in military service. The interior of the Anson has been faithfully restored to how it looked when the Anson’s were on front line service between 1939 and 1941 including replica machine guns and anti-submarine bombs. 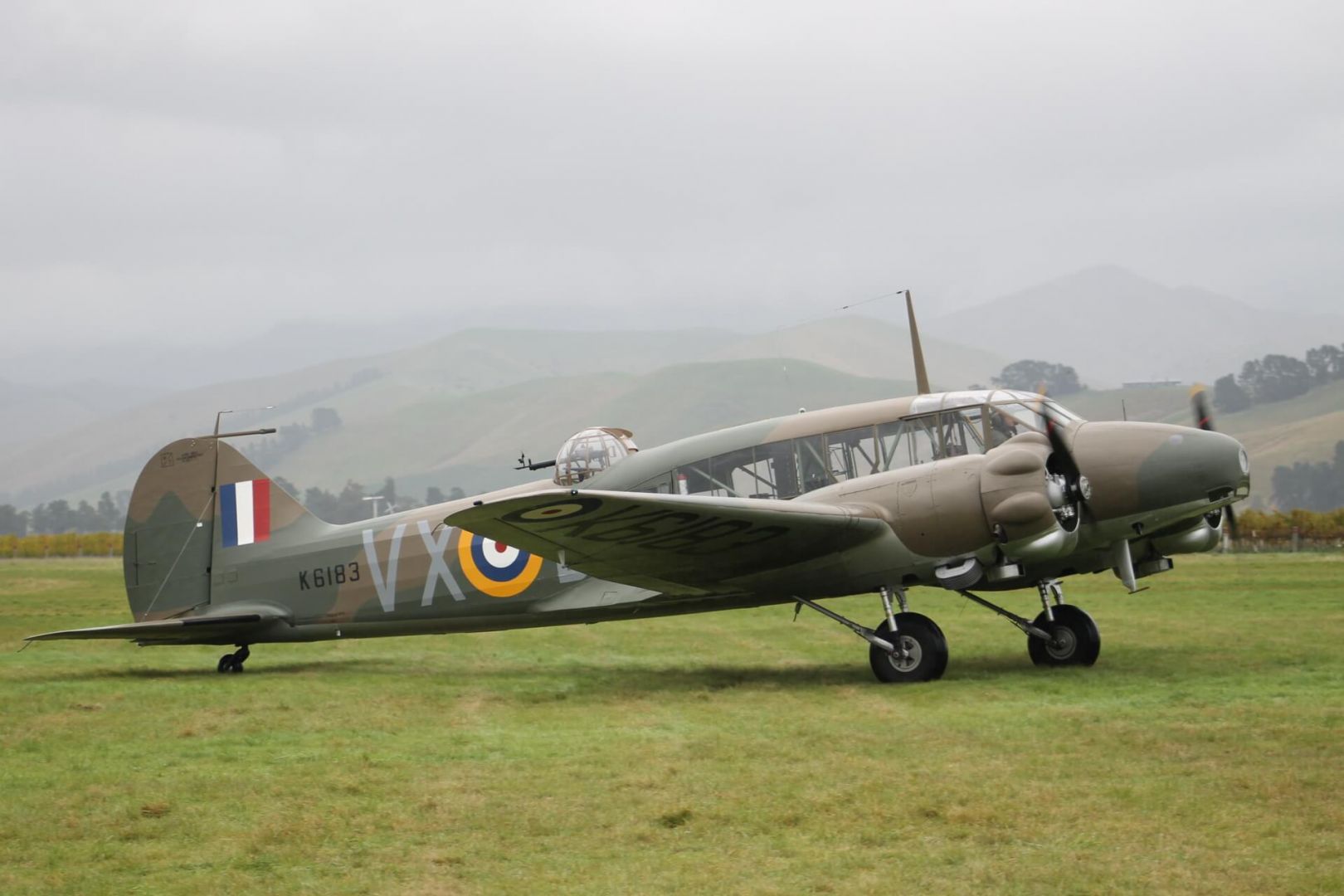 The Yak 3 was the ultimate Soviet fighter aircraft of the Second World War - so much so that the Luftwaffe issued an order that all fighter squadrons were to avoid combat with any Yak lacking an oil cooler under the nose unless they were at a height of over 5000m. Instead, they tried to use surprise tactics, attacking from above.

Full Noise was acquired in pieces by Graeme Frew after a crash on take-off in 1999. It was brought to Marlborough in 2004 and rebuilt by JEM Aviation at Omaka, first flying again in 2012. It has since participated at the Reno Air Races earning Graeme the title “Burt Munroe of the skies” 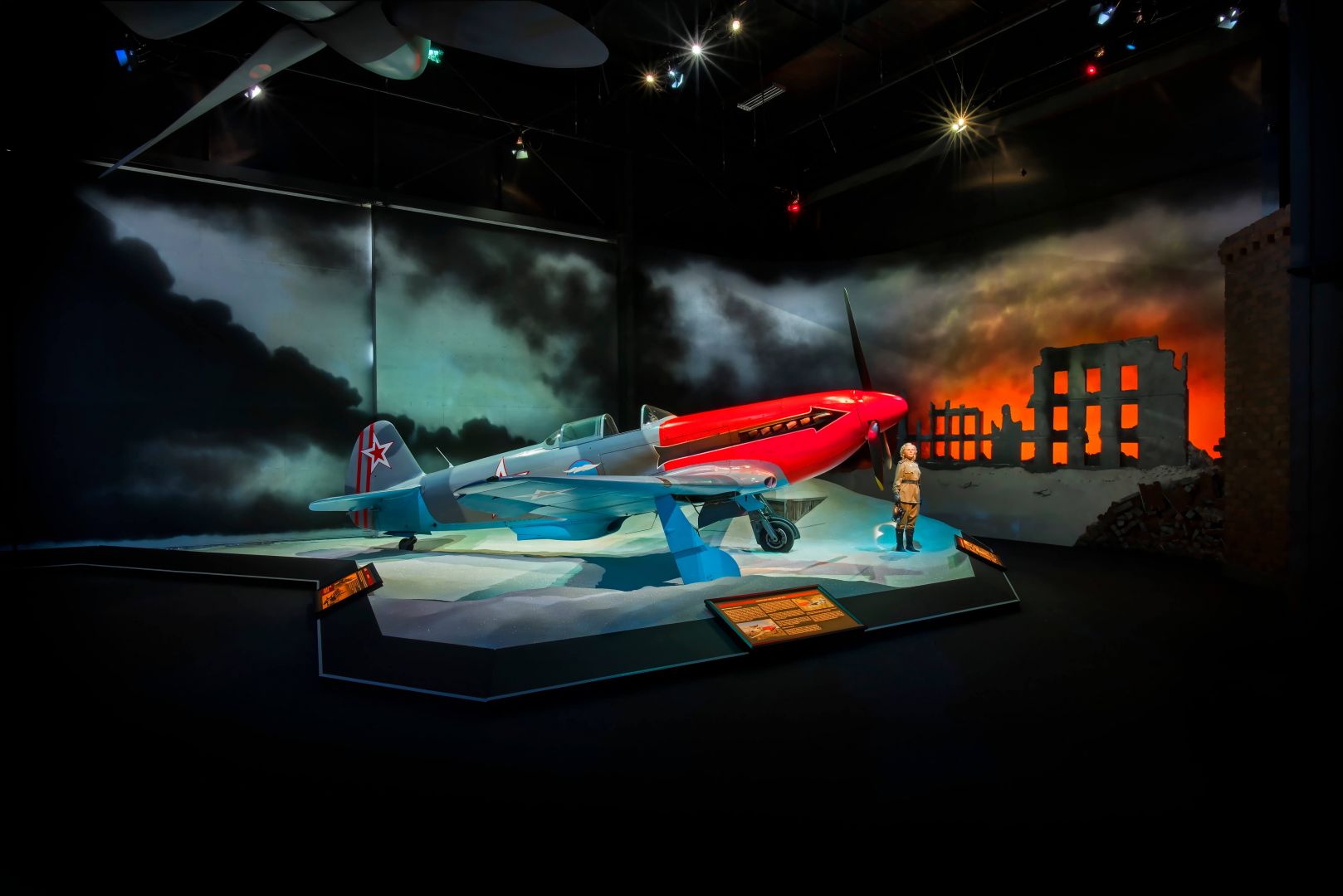 The 450hp three-seat Boeing Stearman was shipped over from California and with checks & assembly by the team at JEM Aviation, was ready for action in 2011.  The "529" is the last three numbers of its previous US civil registration. The great advantage of the Stearman at Omaka is that it is configured with two seats at the front so can take two passengers as well as the pilot.

The Stearman first served with the US military as a WW2 trainer. Over 10000 were built in the USA. 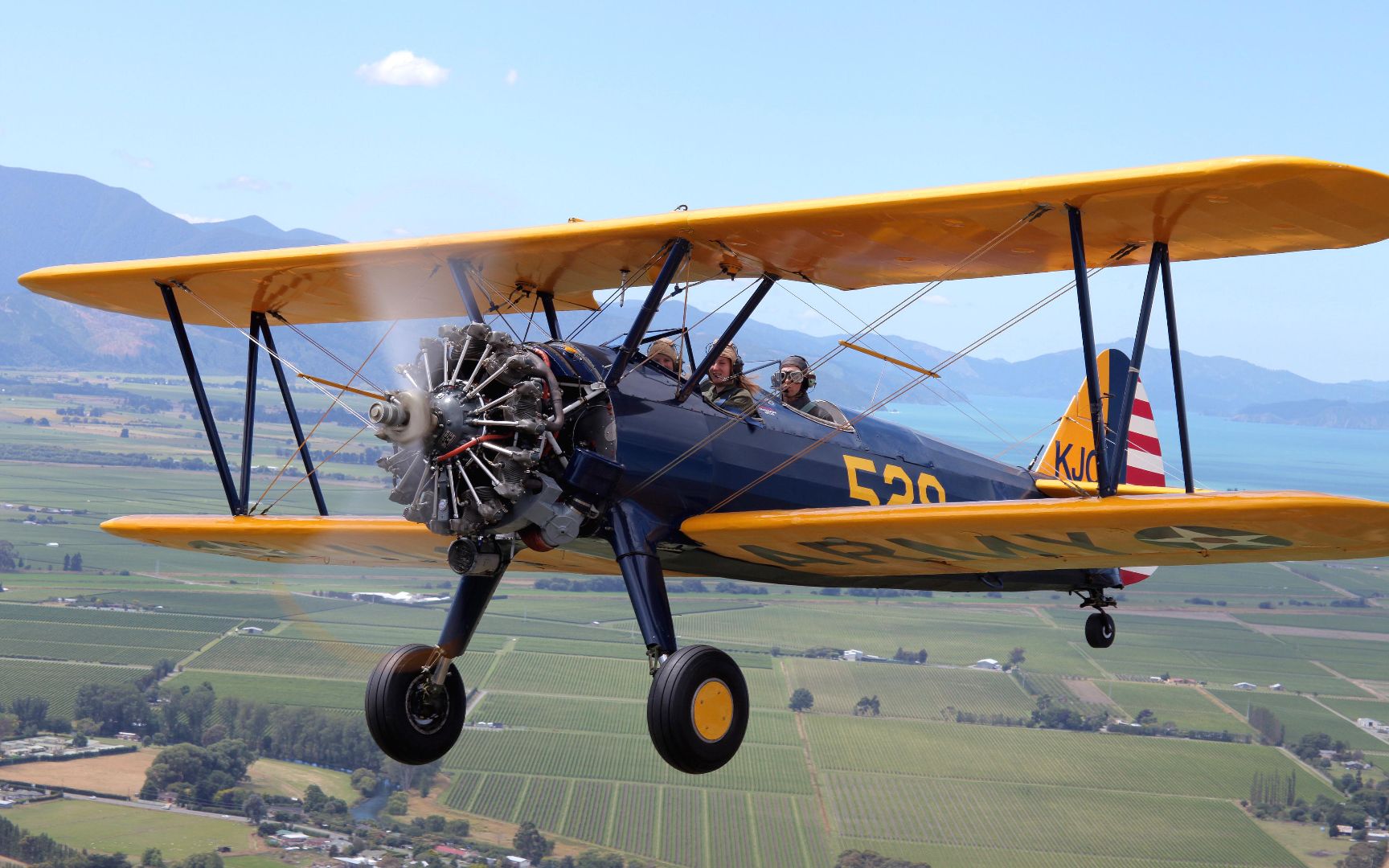 A day at Omaka Aviation Heritage Centre certainly lives up to their mission statement “To establish a permanent 'living' centre of aviation heritage, which will fascinate, educate and inspire visitors of all ages” and with plenty of other attractions in the area is definitely worthy of a few days stay.

Omaka is also well known for its twenty-year history of air show entertainment with the Classic Fighters biennial airshow. As with the museum exhibitions, the airshow is themed to showcase the aircraft in different lights. Here’s what they say

“Members of the Classic Fighters team go the extra mile with friends on the field, around the country, and across the planet, to bring together a mix of aircraft and supporting theatrical equipment to provide a unique mix of attractions every second Easter.  For 2021, we have yet to go too far down the track of locking in attractions as it is 'early days yet'.  That said, this community also works very hard to support local owners and enthusiasts with our far reaching global networking of aircraft owners and sources, to help our local people to realise their heritage aviation dreams and this has helped to develop the resident Omaka based collection of significant show planes that support not just this airshow but other events around New Zealand, although some of the resident treasures, like the Fw190, are only ever flown at Omaka”

There is certainly a broad range of aircraft at their shows ranging from the pioneer era, through the golden age to the jet age, and the spectacular 3-day Classic Fighters is definitely one to have on your calendar. 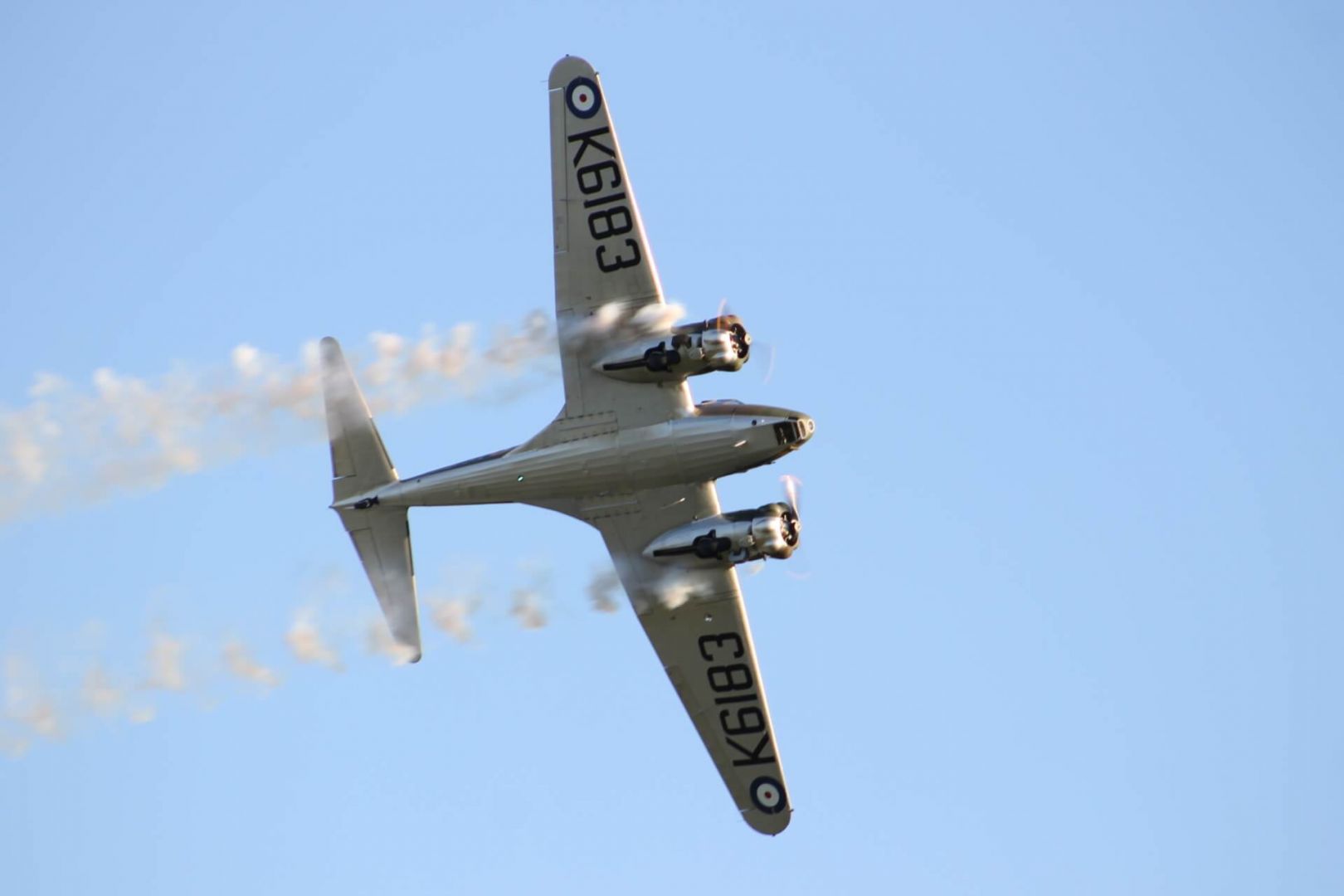 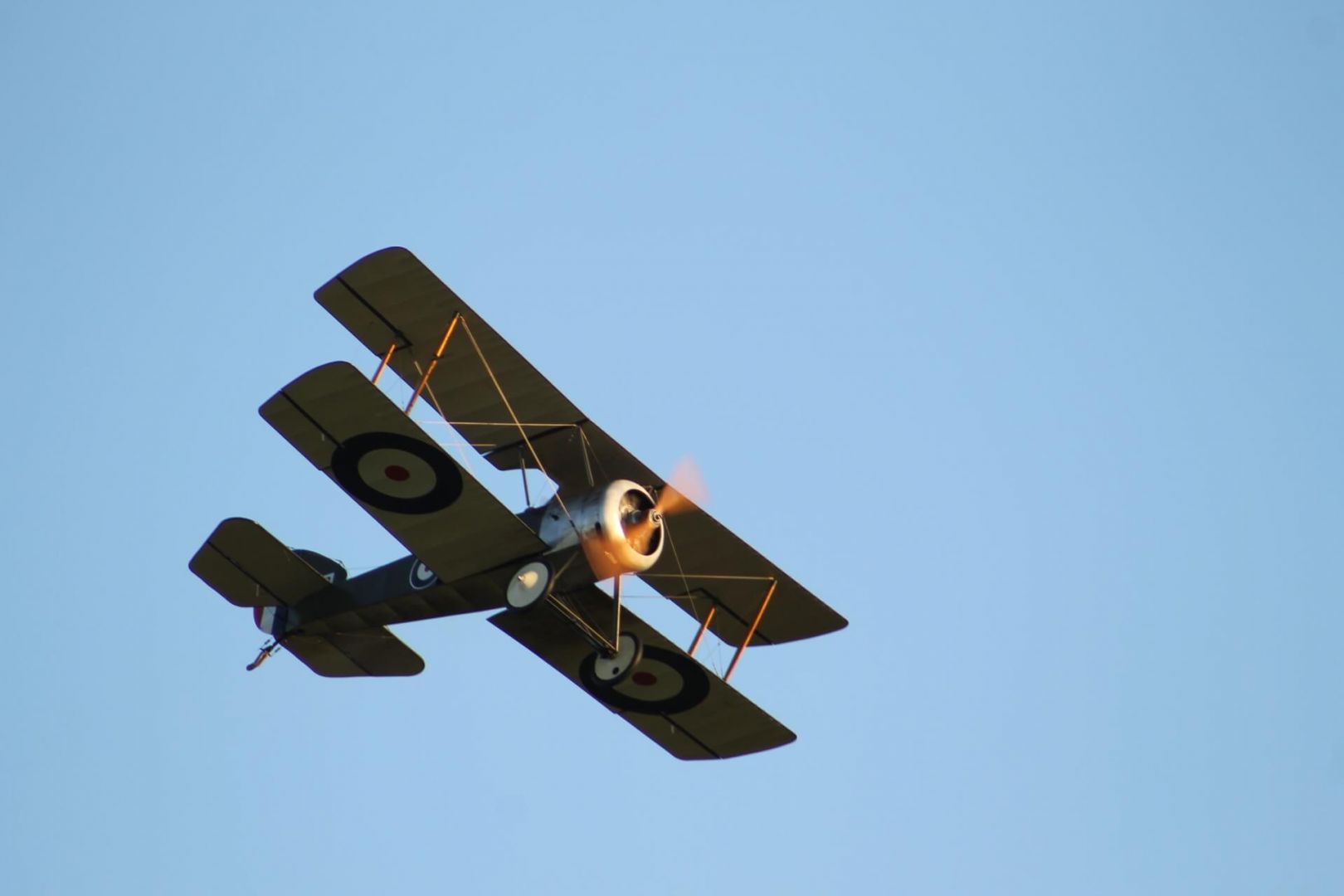 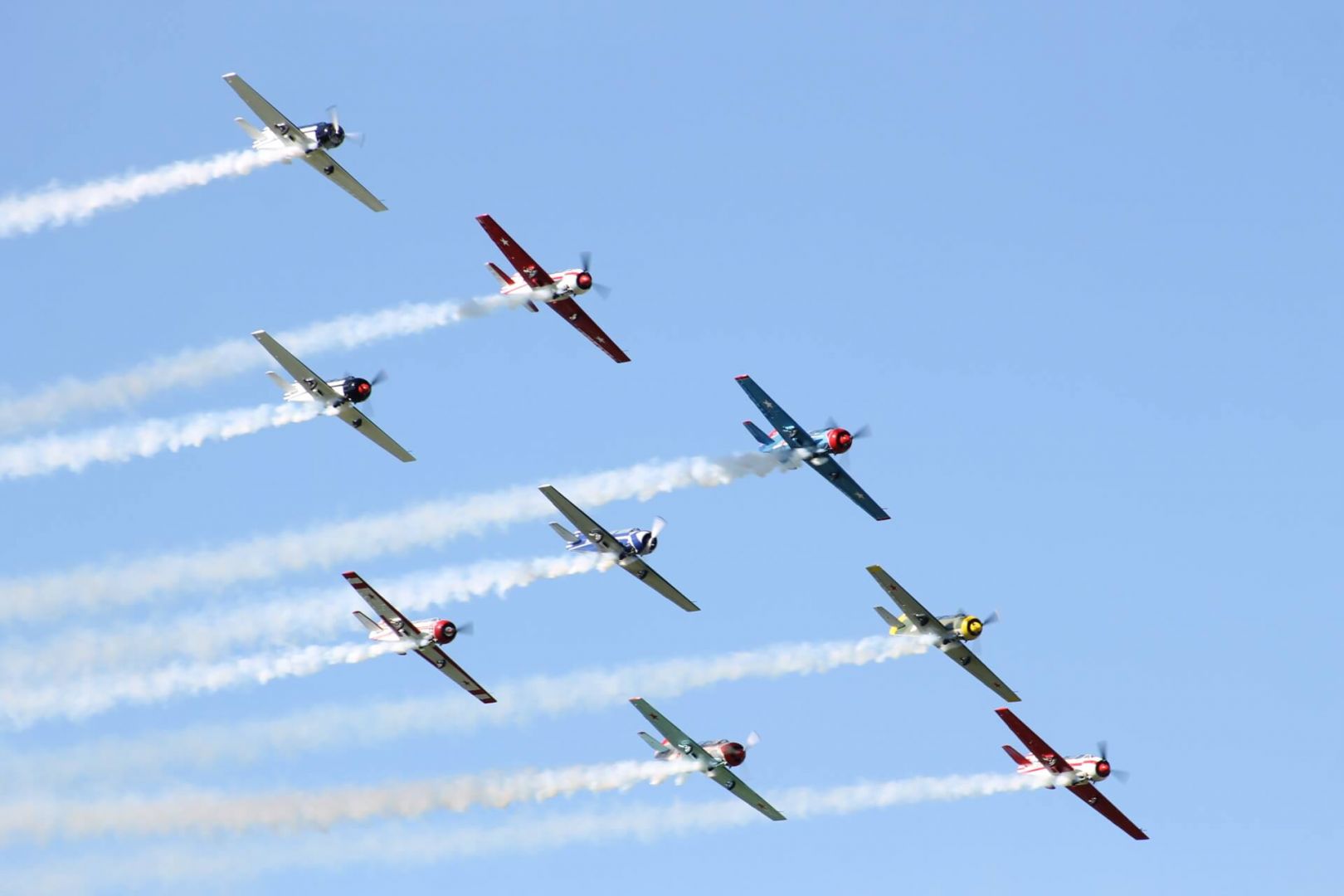 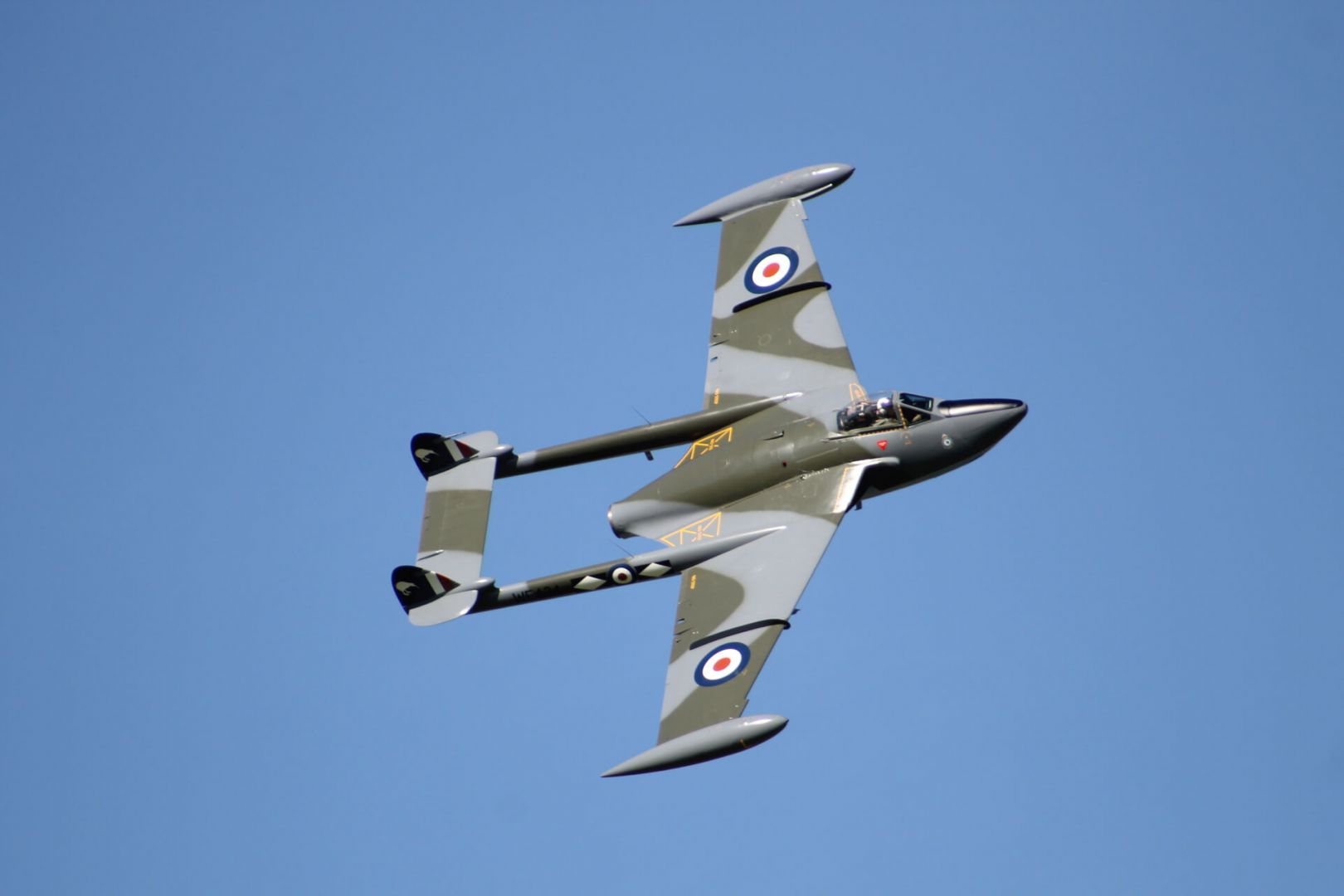 Spitfires in the UK