Aug 2, 2021 Melanie
Over 80 years old now, the DC3 is one of the most mass produced aircraft in history. Around 16000 were built, the earliest in the 1930's for American Airlines who were instrumental in it's development. During WW11 it was the most widely used military transport. According to the DC3 Appreciation Society there are under 200 still flying worldwide, most of which are the USA.
It takes a lot to keep these beauties in the air and we are lucky in NZ to have teams of people with the dedication to do just that. Thanks to flightaware.com for this picture of our NZ three together. 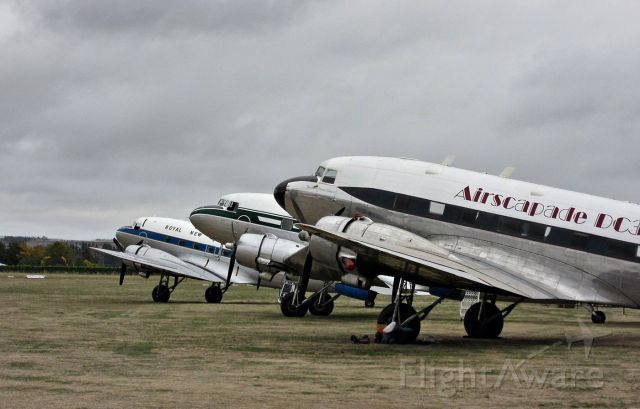 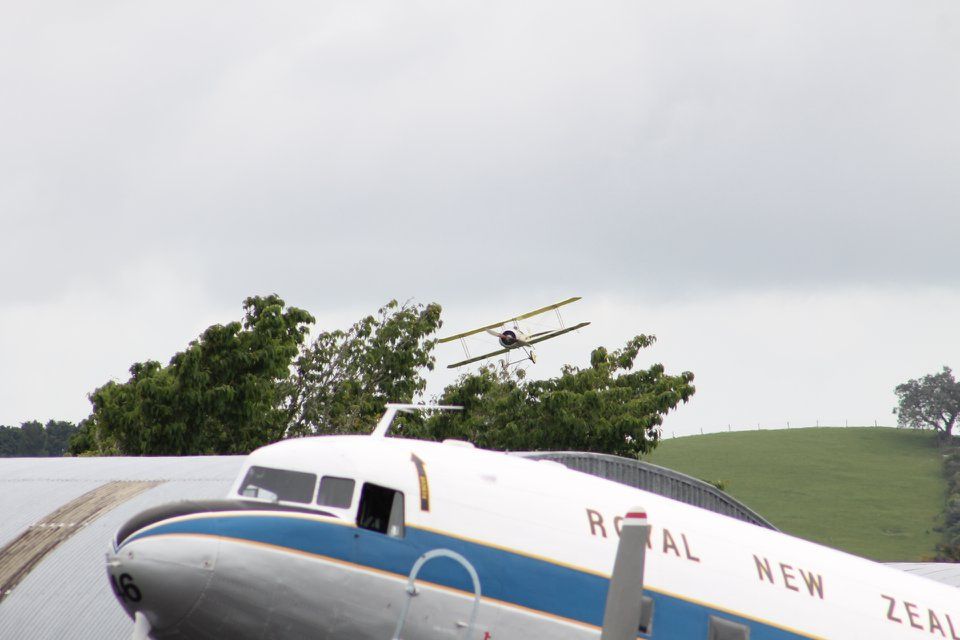 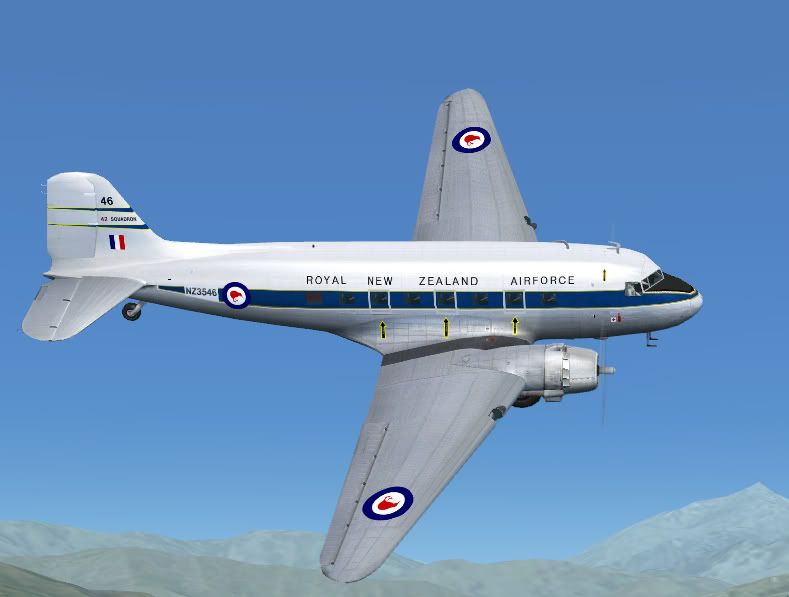 ZK-DAK was manufactured in Oklahoma and began life with USAAF in 1944. After serving at various bases in USA she went on to Japan to cover the Korean War period and was decommissioned in 1959.

After spending some time doing the Manila to Hong Kong service for Philippine Airlines she moved to Port Moresby. In 1970 she appeared on the Australian register in Queensland on lease to Bush Pilots which became Queensland Air in 1982. In 1983 she was retired to Mackay Air Museum after flying for a while as Gooney Bird Tours.

In 1987, she began a new life in New Zealand when she was purchased by a group of New Zealand Warbird pilots and friends and registered as ZK-DAK, undergoing extensive refurbishment. She was initially to be used as a transport aircraft to airshows etc for NZ Warbirds, however gradually moved into passenger scenic flights as well.

For many years the DC3 was painted in the D-Day colours used by the RAF during World War 2 – olive green on the upper surfaces and eggshell blue below. Black and white stripes around the inboard wing and rear fuselage were for identification purposes during the Normandy invasion and were carried by all allied aircraft. The aircraft markings were those of a 48 squadron RAF C-47 flown by New Zealander, Squadron Leader Rex Daniell, DFC, AFC and Netherlands Flying Cross.

A precious and expensive airline operating certificate (AOC) continues to be earned as operating standards are maintained as that of an airline.  With professional airline pilots and cabin crew, she operates local scenic flights, day trips to Whitianga, airshows, aerial scattering of ashes, bespoke weddings, private charters as well as Tours around New Zealand/North Island. Part of their mission is to ‘…keep the experience and emotion of flying DC3 airliners at a high standard alive in New Zealand.’. Her crew wear crisp uniforms – the men/pilots in classic NAC pilot black and white, with the female cabin crew in smart individually styled black and white with royal blue scarves and black hats.

Known in her day as the Queen of the Skies, this beautifully preserved gem of a bygone era will guarantee a truly nostalgic experience. 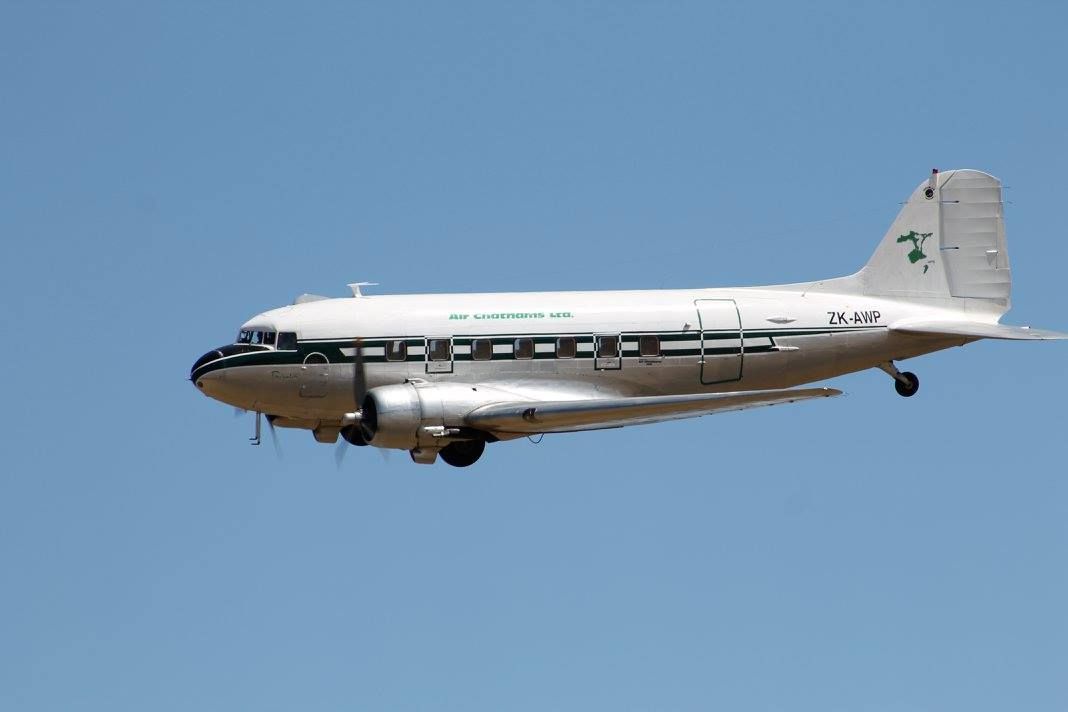 ZK-AWP was manufactured in the USA in 1945 for the USAAF and from May was allocated to RNZAF 41 Squadron as NZ3543, leaving for NZ on the day the Soviet Union seized Berlin. Until 1952 it’s duties included flying servicemen home from the war.

In 1953, it was registered to NAC after being withdrawn from the RNZAF, and named “Powhaitere”, the Maori name for a red-crowned parakeet found on Chatham Island and other remote pacific islands. Following a later conversion to a "Skyliner" around 1963, with bigger windows, heating and sound proofing, ZK-AWP was rolled out again with the new name "Kaitaia". It flew passenger services until the late 1960s

In June 1973 the Western Samoan registration 5W-FAI was cancelled and the DC-3 returned to NAC with its NZ registration ZK-AWP restored, being sold later that year to Southern Air Super Ltd for conversion to a topdresser. A couple of years later ownership of Southern Air Super passed to Fieldair Ltd, Palmerston North. This was the year that a fertilizer loader hopper collapsed onto the aircraft causing damage which saw it out of action for a few years.

1986 saw a transfer to Classic Air Services Ltd and conversion to freighter configuration for Fieldair Freight's contract with NZ Railways.

After a brief ownership by Wanaka-based Alpine Deer Group Ltd in 1993/4, the DC-3 was sold to Classic Air Ltd, Wellington and converted back to airliner configuration. There were several more changes of ownership until Pionair Advenures Ltd, Christchurch acquired it in 2002. Shortly after, while attempting to take off in deep snow at Mt Cook the aircraft skidded off the runway and was substantially damaged, however a full repair was again possible.

In 2004 the New Zealand registration ZK-AWP was cancelled, and the DC-3 went to Tonga when the then Crown Prince Tupuoto’a of Tonga (later the late King George V) chartered it to set up a domestic airline in the kingdom. His Shoreline company, which owned the airline, was deeply unpopular and when riots broke out in 2006, Tupuoto’a properties were targeted. Fearing an attack on the DC3, it was locked away in a hangar for the next three years.

in 2009, whilst establishing services for Air Chathams in the Pacific, Craig Emeny became the proud owner when he purchased the aircraft as part of the hangar’s contents and it was restored to airworthiness, re-painted in the familiar green of Chathams Pacific colour and entered service in Tonga. For the next three years, the DC3 operated passenger services faithfully between islands groups. The aircraft was then flown "home" to New Zealand in December 2013 via Fiji, New Caledonia and Norfolk Island 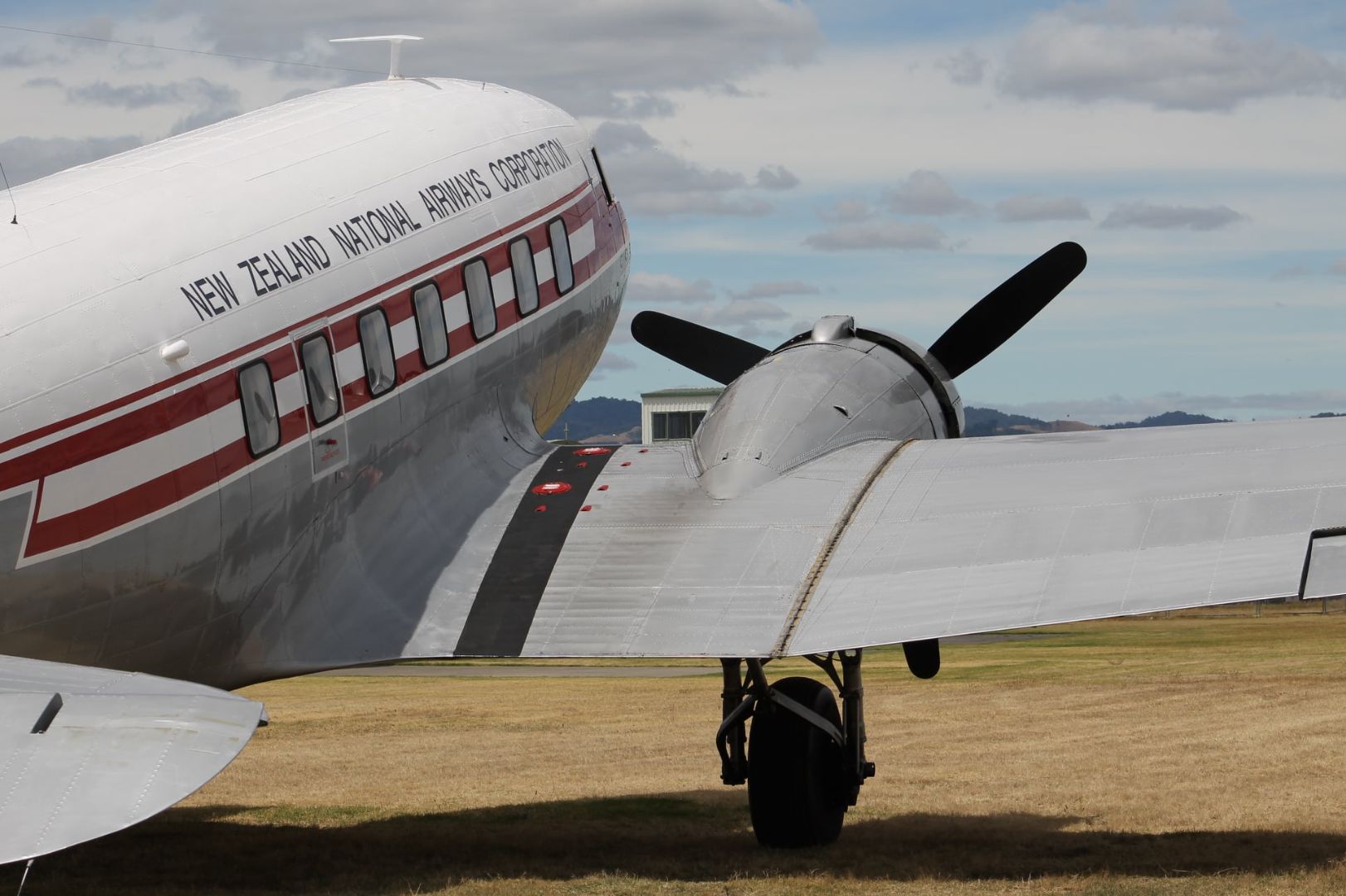 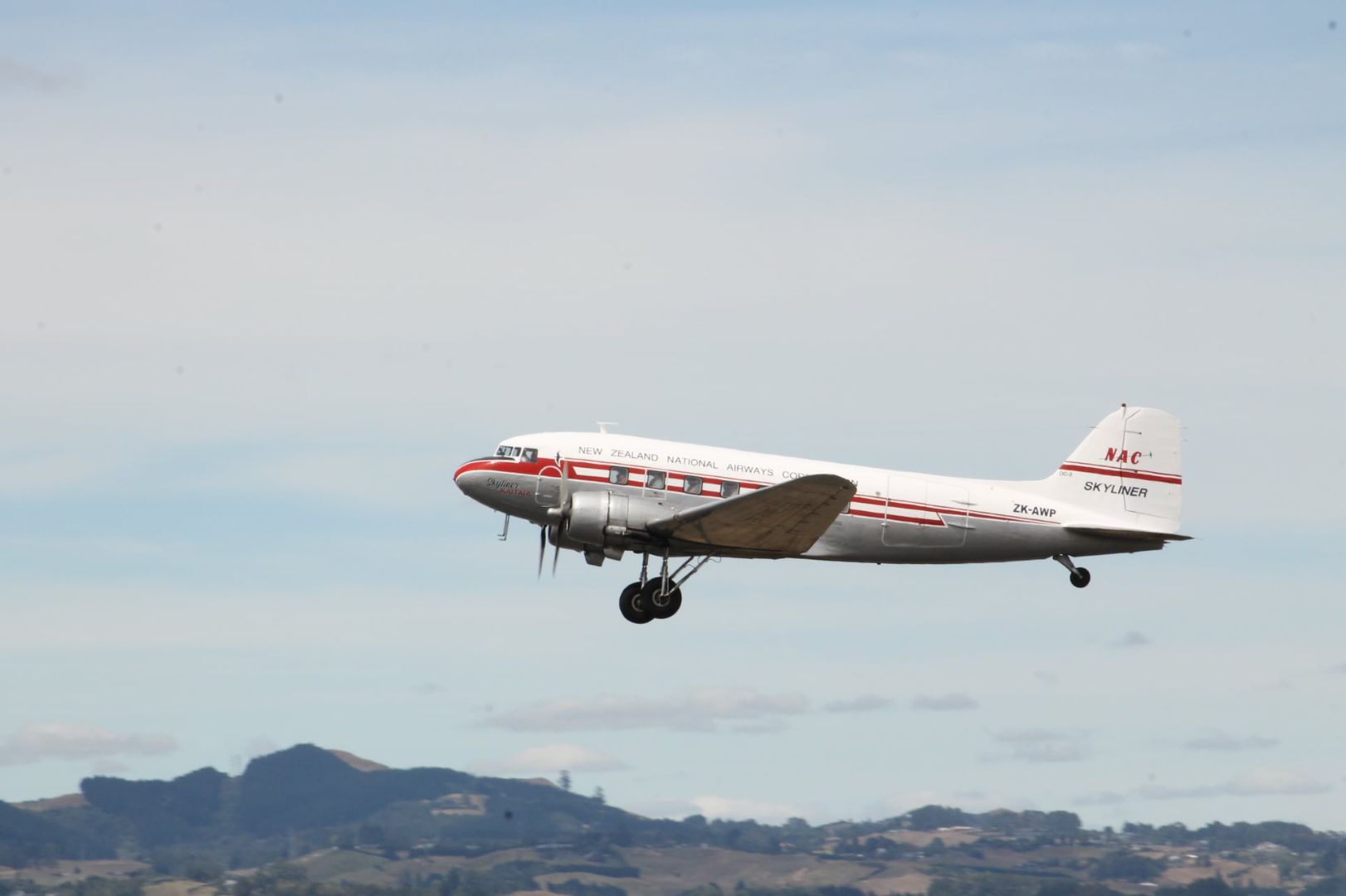 Today it graces our skies in the nostalgic NAC livery, operating scenic flights from Tauranga during the summer months. Red and white were the NAC company colours at that time, with the logo featuring a stylised kūaka (godwit) because of the bird's association with long distance flying. 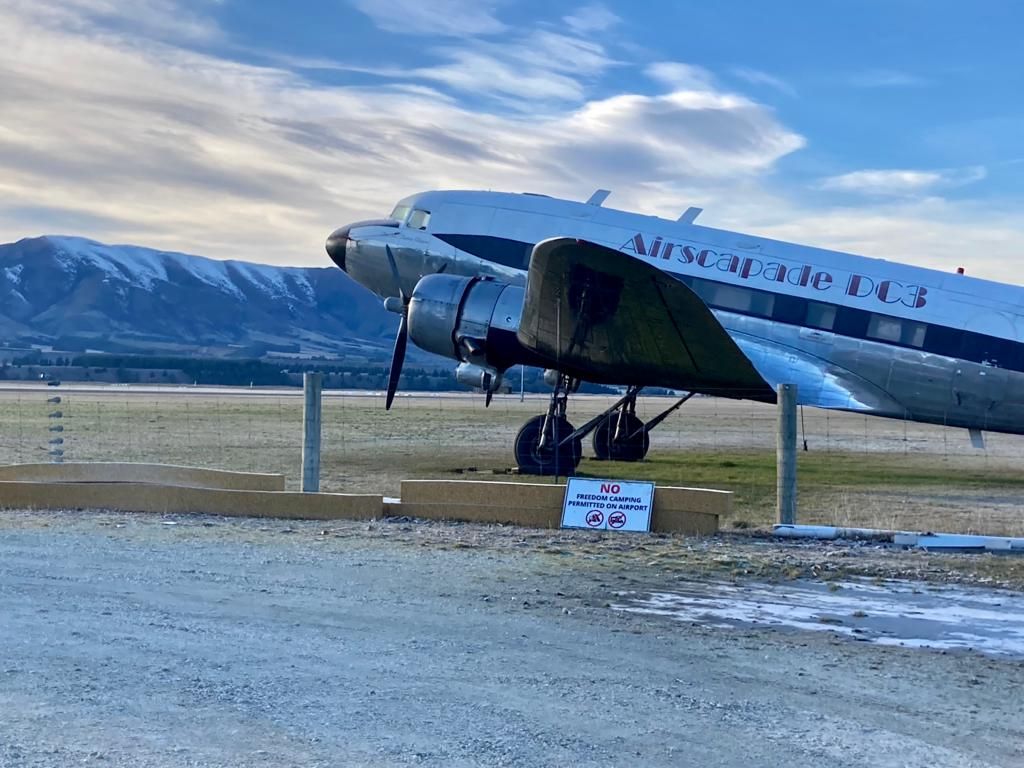 This 1942 build spent it’s first four years with the USN then took up a corporate transport role with a series of different owners in the USA.

In 1979 it went to Prince Talal bin Abdulaziz Al Saud of Saudi Arabia for 8 years operating with marking “Sara”, the name of one of his daughters.

After a brief period back in the USA it ended up in South Africa in 1990 going on to operate safari type passenger charter work for Naturelink to destinations such Victoria Falls, Zimbabwe, Vilanculos, Mozambique and Maun in the Okavango Swamps and Botswana.

With a move and a new career intended in Iceland in 2006, it got held up at Dunsfold in the UK due to bureaucratic issues and spent 6 years in storage. After 6 months in France in 2012 it was eventually flown to New Zealand on a 23-day journey retracing the epic 22,000km route taken by Jean Batten on the first flight from England to NZ back in 1936 when she was just 27.

Civil registration, ZK-JGB was subsequently cancelled later that year, with registration being held for a time in the UK and USA, and then in 2016 after some heavy maintenance was carried out by JEM Aviation at Omaka, it was registered to Airscapade Affairs Limited, Te Anau.

In 2020, consideration was given to turning the aircraft into accommodation, but this idea was quickly dismissed “because it would be such a shame to ground forever such a wonderful flying legend - a pillar of modern aviation”. The aircraft spent some time in Napier when The Hawkes Bay DC3 Charitable Trust was set up intending to sell shares, purchase the DC3 and operate it via the trust as an NZCAA licensed aircraft operation, flying around Hawke's Bay.

However, this did not progress to purchase and Airscapade returned South to continue with the plan to operate commercially for tourists and locals in the South Island. Consequently, it is going through the process of getting a commercial license and the many challenges are being addressed and overcome in the same way as when it came out from England in 2012.

We look forward to seeing this beautiful aircraft in our skies regularly again soon.

Interested in owning a10% share of ZK-JCB and being part of it's future? Get in touch for further details.

You might see noted on other sites that  this aircraft was used in James Bond movie CASINO ROYALE. I can't find evidence to confirm this. According to one source there was one in Quantum of Solace but not JGB.  If you are interested to see all of the aircraft in the Bond movies, here is a bit of further reading - The definitive list of every flying machine in the Bond oeuvre